Architectural destruction past and present 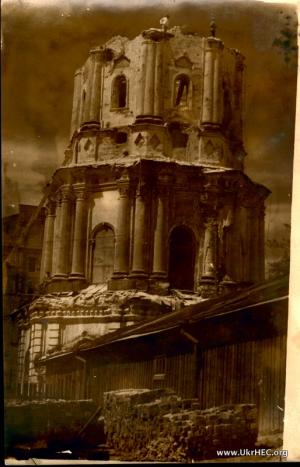 This photograph (from the archival collection of Konstantyn Moshchenko) shows the demolition of the bell tower of Kyiv's St. Nicholas Cathedral in 1934. If you look carefully at the top, you can see two "deconstruction workers" dismantling the masonry. The St. Nicholas Cathedral was one of the many churches commissioned by Ivan Mazepa and was consecrated in the late 1600s. The bell tower seen here was added in the mid 1700s.

In the 1930s, churches were torn down in the name of communism, while today, historically important buildings are destroyed to make room for corporate offices and hotels. In April of this year, the “reconstruction” of the Andriivskyi Uzviz in Kyiv began with the demolition of a nearly 130 year old building that had been declared a landmark of history, architecture, and urban design by the Ukrainian Ministry of Culture in 2011.

As an architect with family heritage from Ukraine and Kiev, I lament the senseless loss of irreplaceable buildings such as these. Development is vital. Yet, it is important that development occur in concert with preservation of historic structures. New and old can co-exist . Thoughtful, creative planning and design can ensure that new buildings incorporate and preserve the older existing context, enriching both and creating a better, more successful overall environment.