This collection houses the personal and professional papers of Fr. Gregory Chomicky, a "first wave" (pre-World War I) Ukrainian immigrant to the United States. It contains material related to his work as a clergyman, both as a parish priest and as a member of the leadership of the Ukrainian Orthodox Church in America and the Ukrainian Orthodox Church of the USA. It also documents his personal and family life as well as parish and Ukrainian-American community activities. 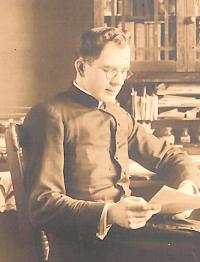 Fr. Gregory was born on October 11, 1891 in the village of Lubianky Vyshchi near Zbarazh in the Austro-Hungarian province of Galicia (now in Zbarazh raion, Ternopil' oblast', Ukraine) to Mykhailo Khomyts'kyi and Domitselia Adamovych. He completed his secondary education at the Ternopil' Gymnasium in 1911, then studied philosophy at the Franz Joseph Imperial University in L'viv. He emigrated to the United States in February, 1913. He continued his studies at the Roman Catholic seminary of Sts. Cyril and Methodius in Orchard Lake, Michigan, and then (at the request of the Ukrainian Greek Catholic Bishop Soter Ortyns'kyi) at St. Mary Seminary in Baltimore. His formal education was interrupted by illness in the fall of 1914, but he continued his studies independently.

He was ordained to the deaconate and priesthood in May 1915 by the Old Catholic Bishop Carmel Henry Carfora in Youngstown, Ohio, and was named Vicar General of the Ukrainian National Church. Due to concern about Bishop Carfora's canonicity, Fr. Gregory was re-ordained by Bishop Stephen Dzubay of the Russian Orthodox Mission in 1918. Fr. Gregory joined the eparchy of Archbishop Ioan (Teodorovych) upon his arrival in the United States in 1924. In the 1930s, he changed his allegiance to Bp. Bohdan (Shpyl'ka) of the Ukrainian Orthodox Church in America.

The late 1940s saw major changes in the landscape of Ukrainian Orthodoxy in North America, precipitated in part by the arrival of large numbers of post-war Displaced Persons, which, in contrast to previous immigration waves, included significant numbers of Orthodox Christians from central and eastern Ukraine. Among the refugees were Orthodox bishops such as Mstyslav (Skrypnyk) and Ilarion (Ohienko), and many Orthodox clergy. Fr. Gregory was literally in the middle of these events. In 1948, a Sobor (general Church Council) took place at the cathedral in Allentown, Pennsylvania, where he was the rector. This Sobor ratified the appointment of Abp. Mstyslav (then with the Ukrainian Greek Orthodox Church of Canada) to join Bp. Bohdan's eparchy. Fr. Gregory was heavily involved in the preparations for the Sobor, as well as with its aftermath (Bp. Bohdan and some priests and parishes did not go along with the Council's decisions and friction developed between him and the governing board of the Church). In 1950, joint Sobors of the Ukrainian Orthodox Church in America and the American Ukrainian Orthodox Church of the USA met in New York City, followed by an Extraordinary Sobor which unified the two Churches to form the present Ukrainian Orthodox Church of the USA (UOC of USA). Fr. Gregory remained with the UOC of USA until his death in 1974.

This collection houses the personal and professional papers of Fr. Gregory Chomicky, a "first wave" (pre-World War I) Ukrainian immigrant to the United States. It contains material related to his work as a clergyman, both as a parish priest and as a member of the leadership of the Ukrainian Orthodox Church in America and the Ukrainian Orthodox Church of the USA. It also documents his personal and family life as well as parish and Ukrainian-American community activities.

This collection is distinctive in that it contains significant quantities of material documenting the critical period in Ukrainian Orthodox church history from 1948 to 1950, and will therefore be of interest to religious historians of. It is also unusual in that it contains letters and other documents relating to Ukrainian-American life in the 1910s and 1920s, a time period which in general is poorly documented in terms of primary sources. The collection has correspondence, ephemera, and photographs related to Ukrainian-American cultural events in Cleveland, Ohio in the 1920s and early 1930s, including community participation in the "All Nations Exposition" and the "Theater of the Nations". Notebooks containing church announcements provide a unique snapshot of the daily life of Ukrainian Orthodox parishes in the 1950s and 1960s. The sacramental records, marriage banns, and related materials will also be of considerable interest to genealogists.

Arranged in twelve series as follows

The collection is open for researcher use. Please contact the archivist (archives@ukrhec.org) for more information and to make arrangements.

After the death of Fr. Gregory, the collection resided with his widow and his daughter Elaine Chomicky White. The collection arrived in the Center in the form of three accruals. The first consisted of photocopies made by Elaine White of portions of the professional records (these make up the bulk of the current Series 12). She subsequently donated the originals of those records, which make up most of the current Series 1. The rest of the collection remained in the custody of Elaine White, and were donated to the Center by her nephew (Fr. Gregory's grandson) John Tockston acting as her power-of-attorney.

This collection arrived at the Center in various degrees of disarray. Apart from the professional papers (which had evidence of both chronological and activity-based arrangement) and the sermons (which were partially arranged according to the liturgical calendar), much of the materials had only occasionally discernable original order. Much of the present arrangement was imposed by the processing archivist.