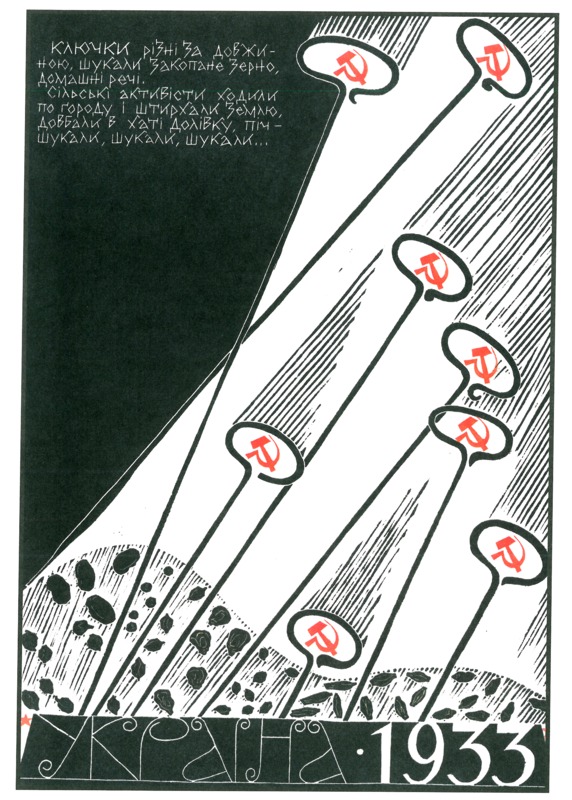 Mykola Mykhaylovych Bondarenko was born in 1949 in village of Dmytrivka in the Sumy region of northeastern Ukraine. He graduated from the Kharkiv School of Art in 1972, and taught drawing and worked as an interior designer. Bondarenko’s work includes portraits, landscapes, book illustrations, and the thematic cycles Ukraine 1933: A Cookbook, Slovo o Polku Ihorevim (The Epic of Ihor’s Campaign), Shevchenkiada, and Khata Moya, Bila Khata (My House, My White House).

From early childhood Bondarenko loved to listen to reminiscences about village life, and he wanted to tell the story of the Holodomor (the artificial famine of 1932-33) in his own personal way. Survivors had told him about the unbelievable “menu” that provided their meager nourishment, and he decided to portray not the emaciated peasants, but rather the food which they were forced to eat in order to survive.

Bondarenko created the cycle of 80 linocuts, entitled Ukraine 1933: A Cookbook, based on the visual theme of the window. The window frame symbolizes the heavy cross carried by those condemned to death, while the panes symbolize the hope to survive. On this background are depicted weeds and other plants consumed by the starving people, and on the lower right windowpane is the “recipe” for preparing this ersatz food. Each of the following pages includes an English translation of that "recipe".

The most touching and alarming are the depictions of animals: cats and dogs fleeing so that they would not be caught and eaten, the carcasses of dead cows or horses, and the panicked eyes of fledgling birds in a nest about to be robbed by the hand of a starving person.

The Ukrainian History and Education Center owns the complete cycle of Bondarenko’s Cookbook linocuts, of which a small fraction is exhibited here.