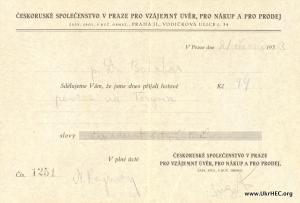 In the early 1930s, Oleksii Balabas (an ethnic Ukrainian political exile living in Prague) managed to re-establish contact with his relatives back in the Kuban'. Among the many letters sent to him by an unknown female relative are two extraordinarily important ones written in 1933. They provide a rare first hand account of the Holodomor that actually made it past the Soviet censors.

In a letter dated June 8, 1933, this relative living in the city of Krasnodar describes how difficult it is to obtain bread or flour. However, she also tells how those who have gold or foreign currency can purchase virtually unlimited quantities of wheat flour at the Torgtsin (hard currency store). It reads (in part): “Liza had a [gold] tooth pulled so that she could get flour...”

In a letter written a month later, the same relative can barely contain her joy at reporting that she received the money on July 29, and was immediately able to buy 20 kg of flour ("not white, of course").

In that same letter, the writer states that she was able to use the flour to make varenyky with the fruit from some fruit trees that they owned, and says that this was the first thing made out of dough that they had seen in two years.

View the letters in the context of Oleksii Balabas's life story.