The Holodomor (Ukrainian, “death by starvation”) was a genocidal artificial famine in Soviet Ukraine and the Kuban’ region from 1932 to 1933 that killed millions of Ukrainians. It occurred in the context of efforts by the Stalin regime to fully collectivize agriculture in Ukraine, and as a part of a broader assault on Ukrainian culture, religion, art, and literature in the 1930s with the goal of repressing any remnant of a Ukrainian national liberation movement and the physical destruction of Ukrainian people.

The works in this exhibition are by the Ukrainian artist Mykola Bondarenko (b. 1949). They depict the various plants and animals that people were forced to eat in order to stay alive and the homemade tools that were used to prepare them. The artworks are all based on firsthand accounts that the artist heard from Holodomor survivors in the Sumy region of Ukraine. The images are stark black and white with hints of subtle color applied in watercolor. The subjects are set against a four-part compositional background, recalling a windowpane or the Christian cross. They also include text that identifies the plant or animal and gives the “recipe” for how it was prepared.

Mykola Bondarenko was born in the village of Dmytrivka in the Sumy region of northeastern Ukraine. He completed his professional studies in 1972 in Kharkiv. After graduating, Bondarenko moved to the village of Uspenky, located approximately 50 miles west of the city of Sumy, where he and his wife still live and keep a small farm. He has been working as an artist and graphic designer, with his primary medium being the linocut. In addition to “Ukraine 1933: A Cookbook”, he has created series of prints entitled “The Epic of Ihor’s Campaign”, “Shevchenkiana”, “My White House”, “The Ruined Temple”, and a portrait series of citizens of the Sumy region. His works have been exhibited in Ukraine, Russia, Poland, Slovakia, and the United States, and he has taken part in joint exhibits in Italy, Germany, France, Belgium, Great Britain, Bulgaria and Latvia.

From an early age, he was fascinated by stories of the past told by the elders in his village. He had learned about the Holodomor from his grandparents while still a child, and he wanted to commemorate it through art. His approach arose out of consideration that although entire families and entire villages were annihilated by the famine, some individuals managed to survive. What was it that helped them defy death while their relatives and friends perished? He collected oral histories from Holodomor survivors and drew on them to create the “Ukraine 1933: A Cookbook” series. Instead of shocking viewers with images of the dead and dying, his subtle but still chilling images give a voice to the survivors and provide windows into their lives during the Holodomor. 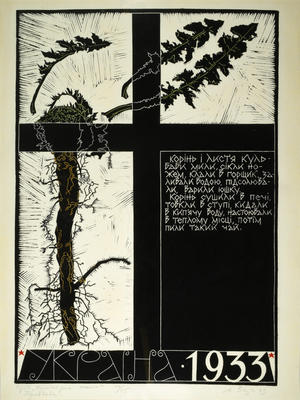 While the Center's new museum building is under construction, we are presenting exhibits in the Library Gallery.

This gallery occupies the location formerly used by the UOC of USA bookstore, and has been completely refurbished for use as a gallery, including the installation of museum-grade UV absorbing film on the windows to protect the displayed artifacts from sunlight damage.

View map and get directions. 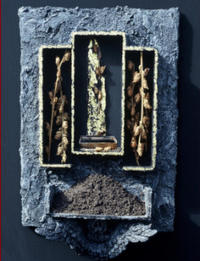 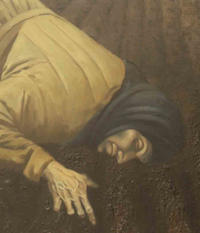 Holodomor Art at the UHEC

The UHEC Patriarch Mstyslav Museum has in its permanent collection a number of artworks commemorating the genocidal artificial famine of 1932-33 known as the Holodomor. These works range from the small and subtle to the graphic and monumental, and are by artists both well-known and not so well-known. 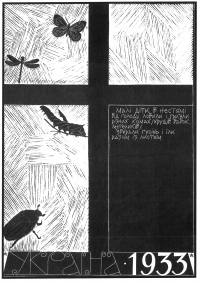 A sampling of a series of 80 linocuts by Ukrainian artist Mykola Bondarenko (b. 1949) depicting the unbelievable “menu” that survivors of the Holodomor subsisted on. 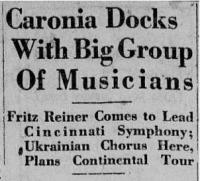 The story behind "The Carol of the Bells"

How did a Ukrainian winter song arranged for chorus by Mykola Leontovych end up as the perennial American Christmas favorite "The Carol of the Bells"? The story involves an unlikely musical ensemble called the "Ukrainian National Chorus". Here we tell the story of the Chorus through archival materials from the collection of Fr. Mykola Kostets'kyi, who was a member of the Chorus in the 1920s. 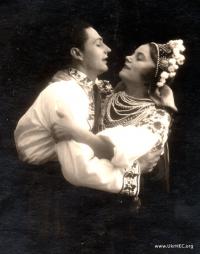 All of the post-World War II refugees who fled Ukraine in the mid 1940s ahead of the advancing Red Army had their tales of hardship and triumph. In this exhibit, we tell the stories of two similar, but at the same time very different refugee experiences.