Immigrant Patriotism: "My Country 'Tis of Thee" in Ukrainian 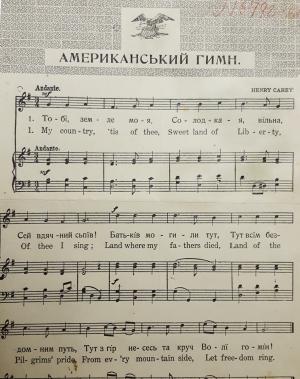 This intriguing piece of sheet music has both the original English and translated Ukrainian lyrics for "My Country "Tis of Thee", a tune better known to our British, Canadian, and other Commonwealth country friends as "God Save the Queen". We don't know who created the translation or exactly when it was published, however, the distinctive spellings (e.g. the use of "ї' in places that current Ukrainian orthography would use "і") suggest it was published in the late 1910s or early 1920s.

The Ukrainian translation is remarkably faithful to the original, even down to the line about the "Land where my fathers died" ("Батьків могили тут", literally "[My/Our] father's graves are here"), which would have been a bit incongruous for anybody singing this in Ukrainian. Their father's graves were actually thousands of miles away on the other side of the Atlantic Ocean.

The very next line ("Land of the Pilgrims' pride") has the largest difference in literal meaning between the original and translation, and the change is intriguing. A literal translation of "Pilgrims'" ("паломників") would have had too many syllables to fit the music, and would also have made no sense to a Ukrainian immigrant. Instead, the anonymous translator made it "Тут всїм бездомним путь" - "To here is a path for all of the homeless". In historical hindsight, this is an eerie premonition of the untold thousands of Ukrainian refugees who would be rendered homeless by World War II a few decades later, many of whom would end up in the United States as DPs (Displaced Persons, or "Delayed Pilgrims", as they were sometimes referred to).

This patriotism may very well have been heartfelt, but it was also politically expedient. A hundred years ago, the United States entered World War I on the side of Britain and France against the German, Austro-Hungarian, and Ottoman Empires. Since Ukrainian immigrants had primarily come from Austria-Hungary, they were viewed with a great deal of suspicion by the dominant "Anglo" population. In Canada, Ukrainian immigrants from Austria-Hungary were even placed in internment camps. By publishing and singing patriotic American songs, they could demonstrate their loyalty to their adopted country and perhaps avoid similar anti-immigrant sentiment.