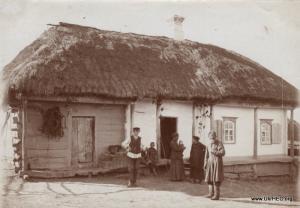 This photograph from the Konstantyn Moshchenko Papers in the UkrHEC archival collections was taken in the early 20th century and shows a village house in the Poltava region of Ukraine, along with villagers dressed as if they have just stepped out of a production of "Fiddler on the Roof".

In the West, have gotten used to the idea that farmhouses should be physically separate from the "barn", where livestock and grain are kept. This is not the case for the house in this picture. It combines a (human) living area on the right, with a "barn" area on the left. In this village, the distinction between the two parts of the building were made even clearer by the fact that the "human" part of the house was whitewashed, while the "barn" area was not.

This type of building was common throughout Ukraine, from the steppes of Poltava to the Carpathian mountains of Lemkivchshyna.