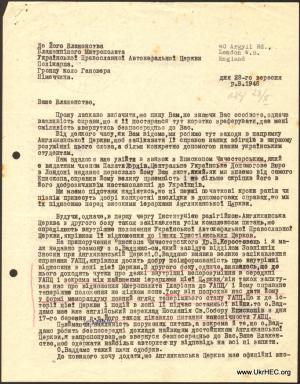 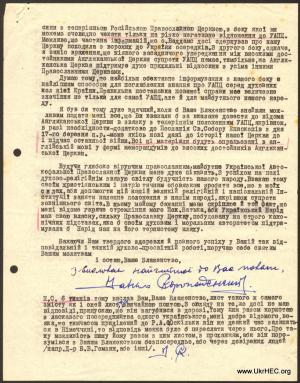 On this day in 1957, Danylo Skoropads'kyi died in London as a result of poisoning (most likely by KGB agents). He was the son of Pavlo Skoropads'yki, the leader of the "Het'manate", one of the short-lived Ukrainian governments during the period of the Ukrainian War of Independence. Pavlo Skoropads'kyi came to power in 1918 in a coup d'état sanctioned by the Imperial German Army, which at the time was occupying Kyiv. He was a monarchist from an aristocratic Ukrainian family, and he styled himself as a modern-day Kozak Het'man.

Danylo was active in various philanthropic causes, and after the death of his father in 1948 he became the leader of the Ukrainian monarchist movement. The UkrHEC archives have this letter written by Danylo in 1946 to Metropolitan Polikarp offering his services as a mediator between the Ukrainian Autocephalous Orthodox Church and upper-level contacts within the Church of England (including George Bell, the Bishop of Chichester), and to try to obtain help for Ukrainian refugees, particularly students