The UHEC, including the Library Gallery, is open to the public by appointment. We are continuing to present online programming as well as small-scale, socially distanced in-person events. Read more...

Registration is closed for this event
This seminar will provide participants with a background of Ukrainian Folk Dance and its evolution to modern day. Participants will also have the opportunity for instruction in basic steps from the Central/Poltava and Hutzul region. 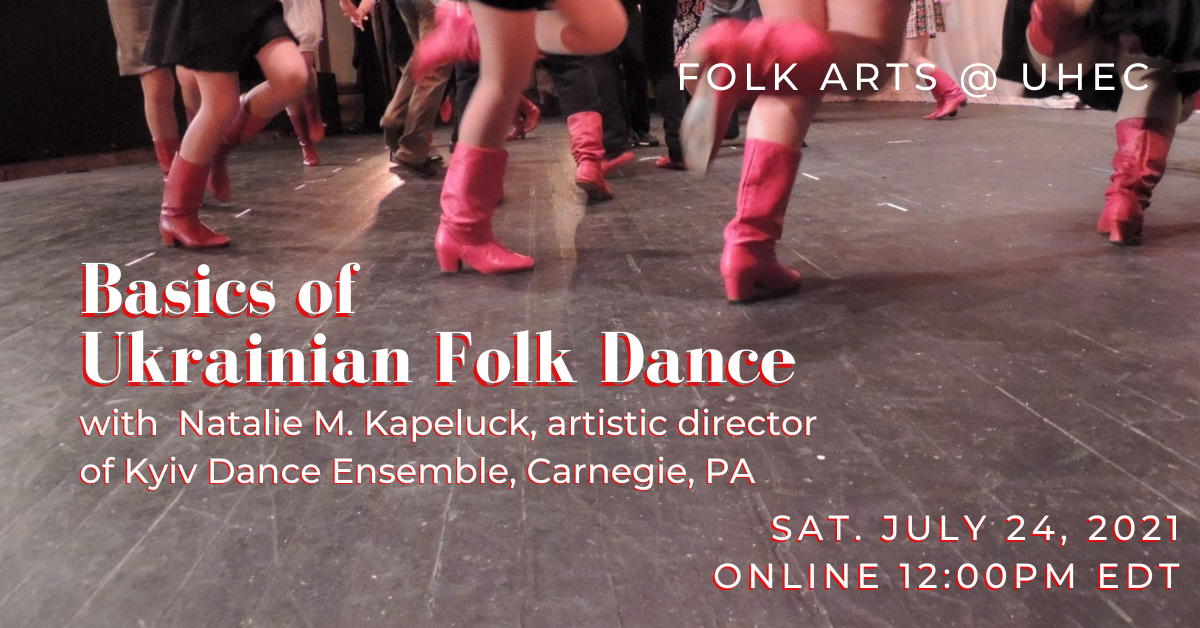 Natalie M. Kapeluck is a product of the Kyiv Ukrainian Dance Ensemble School and was trained in Ukrainian folk ballet by her mother, Beverly Komar Kapeluck (Vasil Avramenko Soloist).  Ms. Kapeluck also attended the Soyuzivka Dance Camps under the direction of Peter Marunczak. In 1986, Ms. Kapeluck began choreographing for the Kyiv Dance Ensemble and, in 1992, became Artistic Director and head of the School.

In 1994, she received a Bachelor’s Degree in Dance from Point Park College.  She has performed, choreographed, managed and designed lighting for  various ballet and modern companies and high schools in the Pittsburgh area.  Ms. Kapeluck has taught for Southwest Ballet, Civic Light Opera Academy, Pittsburgh Ballet Theater School, Western Pennsylvania School for the Deaf and many others, in addition to conducting Ukrainian Dance workshops across the US and Canada. Ms. Kapeluck was a featured dancer with the Mary Miller Dance Company for eight seasons.

In addition, she choreographed three multi-disciplinary shows with MN2 productions based on Ukrainian Folklore. In the summer of 2007, MN2 production  Ancestral Voices toured in Cincinnati, Cleveland, New York City and Toronto.  In March 2003, Ms. Kapeluck formed her own dance company, Slava Dance. Her most recent endeavor with Slava entitled Ukie Fusion, was awarded Best Madhatter Performance at the 2016 Pittsburgh Fringe Festival.  Ms. Kapeluck was honored to be named the 2010 Ukrainian Technological Society’s Ukrainian of the Year for her work in Ukrainian Folk Dance.

This webinar is FREE, but registration is required to view.  Donations are gratefully accepted!

Please help us and let your friends, colleagues and followers know about our page: Basics of Ukrainian Folk Dance with Natalie Kapeluck - Online

Ukrainian Beaded Adornments Past & Present with Maria Rypan - ONLINE
September 25th, 2021
Be dazzled by the splendour of traditional adornments (‘prykrasy’) from (more...)

Canada vs. the U.S.: A comparison of Ukrainian immigration from the earliest days to the present
September 28th, 2021
This co-presentation with the Ukrainian Genealogy Group - National Capital (more...)

Netting Know-How: Sylianka Beading Basics with Maria Rypan - ONLINE
October 16th, 2021
Join Maria Rypan for this workshop where she will show you how netting is (more...)

Hands-On Beading: Sylianka with an "X" with Maria Rypan - ONLINE
November 20th, 2021
Join Maria Rypan for this workshop where she will show you how motifs are (more...)