The UHEC Archives are pleased to announce that the Iurii and Ol'ha Perkhorovych and the Maria Hrebinets'ka papers are now open for researcher use.

Iurii Perkhorovych (1894-1976) and his wife Ol’ha (1909-1994) were World War II displaced persons from the Volyn' region of northwest Ukraine who settled in Brooklyn in the early 1950s. Iurii was a university-educated teacher of history and Latin, but because of his weak knowledge of English could only find work as a manual laborer in the United States. However, in his spare time he researched history avocationally, wrote extensively on Ukrainian history and archaeology, and published in Ukrainian diaspora periodicals. The collection contains his voluminous research notes, manuscript drafts, completed articles and lectures, and related materials.

Both Iurii and Ol'ha also corresponded with a huge number of individuals, including noted historians and archeologists (such as Viacheslav Seniutovych,  Iaroslav Pasternak, Aleksander Cynkałowski, and Jakub Hoffman); politicians, diplomats, and army veterans of the Ukrainian People's Republic (such as Vasyl' Fylonovych, Roman Bzhes'kyi, and Olimpiada Pashchenko-Shul'mins'ka); and religious leaders (including Metropolitan Mstyslav, Metropolitan Nikanor, Bishop Anatolii (Dublians'kyi), and numerous Ukrainian Orthodox clergy). Some of these were quite colorful characters, such as Ivan Svit, who was a journalist and community activist among the Ukrainian expatriates living in Vladivostok, Manchuria, and Shanghai before coming to New York City via Alaska.

The Perkhorovyches also corresponded with the family of Levko Matsievych, who was a Ukrainian naval engineer in the Russian Imperial military, and is credited as being the first Ukrainian aviator. It includes photographs of Matsievych and his family, as well as letters from Levko's daughter Tetiana Matsievych Porsch, who moved to France along with her mother after the Russian Revolution, as well as other family members. 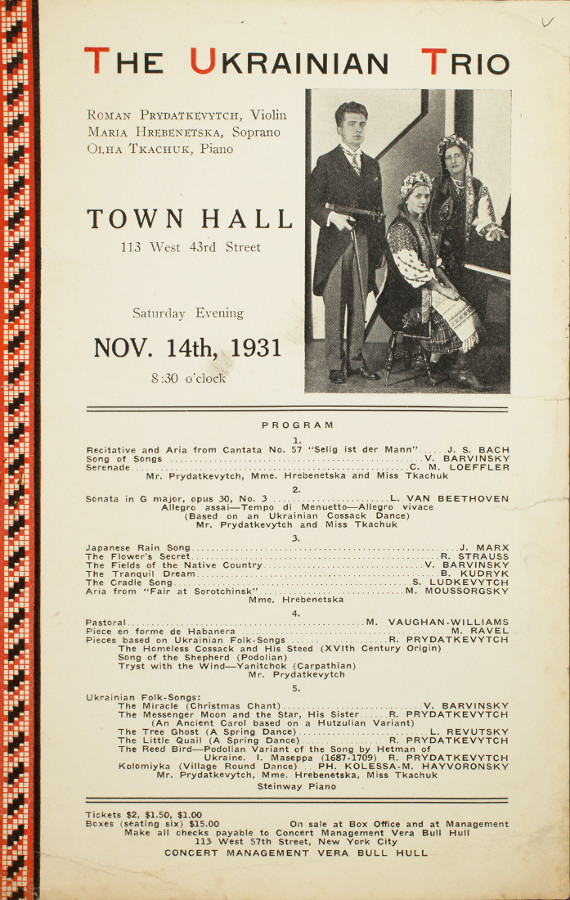 While processing the Perkhorovych collection, it was discovered that the Perkhorovyches had acquired and saved the personal papers of the Ukrainian opera singer and music educator Maria Hrebinets'ka (1883-1972). She was born in Kyiv and studied voice at the Lysenko Music and Drama School under the famous Ukrainian tenor Oleksandr Myshuha, as well as in Milan, Italy. She performed at the Odessa Opera, the Sadovs'kyi Ukrainian Theater, and the L'viv Ukrainian Discourse Theater (Театр Української Бесіди) before joining the Ukrainian National Chorus under the direction of Oleksandr Koshyts'. She traveled with the Chorus to the United States in 1922 and toured with them until 1924. In 1931, she was a founding member of "The Ukrainian Trio" in New York City, and she sang the vocal part of the title character in V. Avramenko's 1938 film "Marusia" (though the on-screen role was performed by a much younger actress). In 1941, she graduated from the Washington Irving Evening High School in New York City with a Gold Medal for Scholarship. This enabled her to attend Hunter College, from which she graduated in 1949. She continued to perform and direct stage productions, and taught voice and piano at the Ukrainian National Home and the Surma Book and Music Company in New York. Her end was operatically tragic: she died after being struck by a taxi cab on her way to visit her seriously ill husband in the hospital.

Her papers include a significant number of concert programs and advertising flyers from the 1920s through the 1930s, newspaper clippings, photographs, and sheet music. It also includes personal items, such as her Washington Irving High School scholarship medal and her Hunter College diploma.

Completion of the processing of these collections was greatly assisted by Kathryn Todaro, a senior undergraduate history major at Rutgers University, who was an intern at the UHEC Archives through the Rutgers Public History Internship Program.  It’s safe to say that without her help with the tedious work of foldering, sorting, labeling, and creating database entries for 12 linear feet of materials, this collection would still be in the inaccessible, partially processed state that it was in at the beginning of 2019.

Processed collections at the UHEC Archives are open to all researchers by appointment.