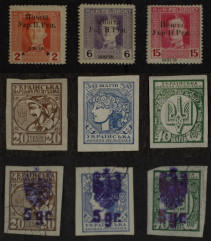 When Ukraine declared full independence in 1917 in response to the Bolshevik revolution, the Ukrainian People's Republic suddenly needed to create all of the symbols of state sovereignty, like a coat of arms, postage stamps, and paper currency, almost from scratch. Postage stamps, of course, were far more important then than they are in today's internet world, and Ukraine enlisted some of the foremost graphic designers of the day to create stamps that conveyed a vision of a free Ukraine. 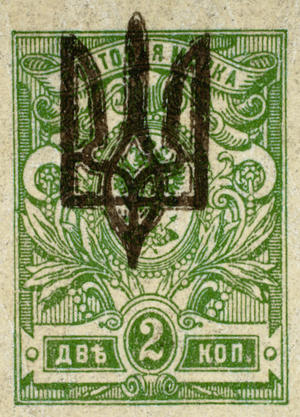 Designing an entire new set of stamps takes time. In order to get Ukrainian stamps in circulation quickly, they did what was commonly done by many newly-formed nations: they repurposed stamps issued by an earlier state by adding an overprint. In this case, they took 2 kopek stamps issued by the Russian Provisional Government in 1917 (with a design first issued in 1909 through 1912), and in 1918 overprinted the Russian coat of arms (the two-headed eagle that Russia had appropriated from Byzantium centuries earlier) with the Ukrainian tryzub.

The Ukrainian People's Republic finally did issue its own stamps in 1918. They were designed by Heorhii Narbut and Antin Sereda.

Narbut was perhaps the most important Ukrainian graphic designer and illustrator of the early 20th century, and he was responsible for creating much of the visual symbolism for Ukrainian statehood. He was born near the historic town of Hlukhiv in northeast Ukraine, studied art in St. Petersburg and in Munich with the noted Hungarian artist Simon Hollósy, and returned to St. Petersburg, where he joined the “Mir iskusstva” art movement and worked as a book illustrator. In 1917, he moved to Kyiv, where he was a founding member and rector of the Ukrainian Academy of Arts. He died in 1920 at the age of 34 in the massive wartime typhus epidemic that had engulfed Kyiv.

The 20 shahy stamp on the left below was designed by Sereda, while the other two are the work of Narbut.

Stamps of the Ukrainian People's Republic

Of course, the independent Ukrainian state that began in 1917 didn't survive: it was attacked from all directions, and the delegation sent to the Paris peace conference was not recognized and did not take part in the negotiations that led to the Treaty of Versailles. Instead, the "great powers" decided that it was more expedient to have a strong Poland on the western border of the Soviet Union, rather than a potentially weak and unstable Ukraine. So, the western portion of Ukraine became part of Poland, which continued the process of reuse by overprinting Ukrainian stamps with the eagle of the Second Polish Republic.

Stamps of the Ukrainian People's Republic with Polish overprint

All of the above images are of items from the Peter Sylchak stamp and paper currency collection at the Ukrainian History and Education Center Archives.