Theater amid the ruins of war 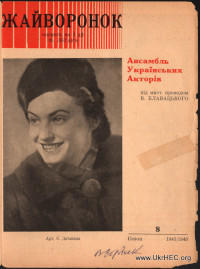 We have seen amazing stories from Ukraine about people creating art and putting on theater productions in the midst of war, suffering, and displacement. Three quarters of a century ago, Ukrainians were doing exactly the same thing.

The last time there were this many refugees from Ukraine was after World War II. Unlike today, it was soon clear that they would not be returning home. Given the devastation in post-war western Europe, the only places that many of them had to live were in German barracks and similar facilities that were converted into displaced persons camps. Despite the circumstances of the camps, Ukrainians continued to pursue art, culture, and scholarship.

One exampe of this was the “Ensemble of Ukrainian Actors” (“Ансамбль Українських Акторів”), a theater company formed by the veteran actor and director Volodymyr Blavats'kyi at the Somme Kaserne displaced persons camp in Augsburg, Germany. It staged a series of productions that would be ambitious under any circumstances, but completely astounding in the context of a refugee camp.

This program (from the Vasyl' and Liudmyla Serdiuk papers at the UHEC) is for the eighth production of their 1945-46 season: a Ukrainian translation of "Where the Lark Sings" by Franz Lehár:

The season had already included "The Ghost Train" by Arnold Ridley, a staging of works by Vasyl’ Stefanyk, “The Spanish Fly” by the comedic playwrights Arnold and Bach, “Stepovyi Hist’” by Borys Hrinchenko, “Chornomortsi” by Iakiv Kukharenko, “Myna Mazailo” by Mykola Kulish, and a staging of two dramatic poems by Lesia Ukrainka.

The season was to go on to include “Ukradene Shchastia” by Ivan Franko and another Arnold and Bach farce. The program also lists four works for a planned 1946-47 season: “Narodnii Malakhii” by Mykola Kulish, “Voroh” by Iurii Kosach, an “Evening of Rhythm and Melodies” (presumably a musical revue), and a Ukrainian translation of “Die keusche Susanne” by Jean Gilbert. We have not been able to confirm if all of these were in fact performed, though the Ukrainian Wikipedia article on the “Ensemble of Ukrainian Actors” does include a photograph of a scene from “Narodnii Malakhii”: 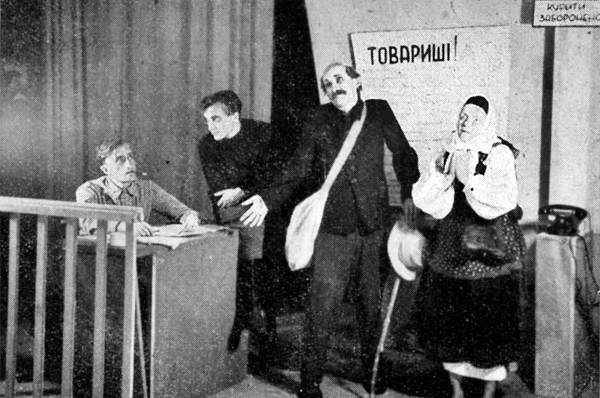 Blavats'kyi himself would end up resettling in Philadelphia, where he continued to produce serious amateur and professional-level theater productions in the Ukrainian American community.