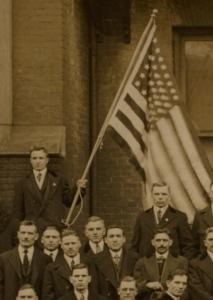 In December 1918, representatives of local Ukrainian American organizations met in Washington, DC under the auspices of the “Federation of Ukrainians in the United States”. Meanwhile, the newly-independent Ukrainian state was under its third government in less than one year and was fighting for its survival on multiple fronts against nearly all of its neighbors.

The “Federation of Ukrainians” was one of several umbrella groups that raised money and lobbied the U.S. Federal government in support of Ukraine during and immediately after World War I. They were ultimately unsuccessful in gaining recognition for an independent Ukrainian state, but they did succeed in creating a common Ukrainian American identity and increasing knowledge about Ukraine among Americans.

Federation of Ukrainians in the United States