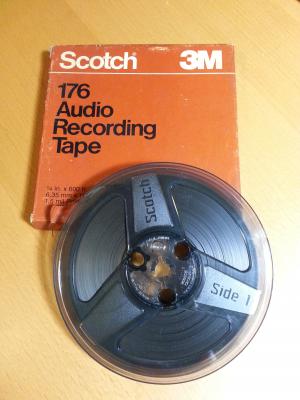 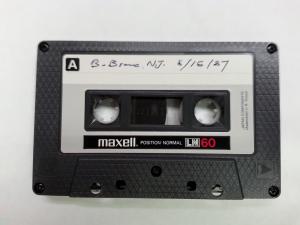 In theory, cultural institutions which purchase or receive donations of archival or art develop their strengths by instituting collecting policies and actively targeting certain topics or periods. In practice, an institution can end up building up a strong body of materials quite serendipitously. This is what has happened at the Ukrainian Historical and Educational Center in the area of Ukrainian-language radio broadcasting.

The collection began with a set of radio scripts from the Ukrainian Service of Radio Liberty, which were sent by its director Mykhailo Demkovych-Dobrians'kyi to (the then) Archbishop Mstyslav. This lone collection was soon supplemented by the professional papers of Volodymyr Kedrowsky (director of the Ukrainian Service of the Voice of America) and Liudmyla Ivchenko (a writer and broadcaster working under Volodymyr Kedrowsky at the VOA), both of which also contain substantial numbers of radio scripts. On a local level, the Center's archives also hold the records of the weekly Ukrainian-language radio program produced by the St. Volodymyr Ukrainian Orthodox Cathedral in Chicago.

While these collections had a large number of paper scripts, there were very few recordings to document what is primarily an auditory genre. This has changed in a big way with the acquisition this year of the Mykola Francuzenko Papers.

Mykola Francuzenko was a Ukrainian-American writer (under the pseudonym Mykola Virnyi), translator, theatrical director, radio journalist, and social activist. His literary output includes over 400 works, and he was a writer and broadcaster for the Ukrainian services of both Radio Liberty and the Voice of America during the Cold War. He was known for his speaking and recitation, and was considered a master of the art of the Ukrainian spoken word.

An initial group of materials was donated to the Center by Mykola's widow Jaroslawa in April, 2014. In addition to containing substantial amounts of paper scripts and working notes, it included 30 reel-to-reel audio tapes, some of which contain unique unedited interview recordings (including of Metropolitan Ioan Teodorovych), recordings of poets reading their own works, and live recordings of events in the Ukrainian-American community.

On August 11, 2014, the Center's archivist stopped by Jaroslawa Francuzenko's house on his way to the Society of American Archivists meeting to pick up another 10 boxes of materials. Four of these boxes contain reel-to-reel, cassette, and microcassette recordings, many of which likely contain audio of interviews and events. With this generous donation, the Center now has one of the most significant bodies of archival materials related to Ukrainian-language radio broadcasting outside of Ukraine. Considerable work still needs to be done to make these collections fully accessible, but the long-term goal is to have as much of this audio available on the Center's website as copyright law will allow.

Help make these recordings speak! The average lifespan of reel-to-reel audio tape is approximately 50 years. The recordings in the Francuzenko Papers and other collections at the Center are therefore nearing the end of their physical lives, and need to be digitized before they disintegrate. Do you have a 1/4" reel-to-reel machine, high-end cassette player, or microcassette recorder which you no longer use? Consider donating it to the Center to help us with our digitization efforts!