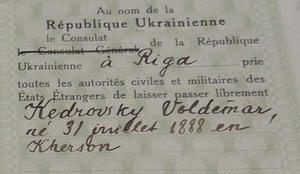 As we write this post, the Ukrainian army is battling against seemingly overwhelming odds to defend several key cities from the invading Russian Army. One of these is the strategically critical city of Kherson at the mouth of the Dnipro River. This city and the surrounding area is closely connected to two significant collections in our archives and museum holdings.

Kherson was the birthplace of Volodymyr Kedrowsky, a portion of whose archives reside at the UHEC. This past summer we were honored to accept an addition to that collection from his son, a donation that included official military documents, diplomatic passports, and other materials from the Ukrainian People's Republic (in Ukrainian, Ukrains'ka Narodna Respublika or UNR).

Among the documents is this passport, which was issued to him by the UNR consulate in Riga, Latvia in January 1920. Written in Ukrainian and French, it gives his name, birthdate and birthplace, and indicates that it is valid for travel and residence anywhere "beyond the borders of Ukraine": 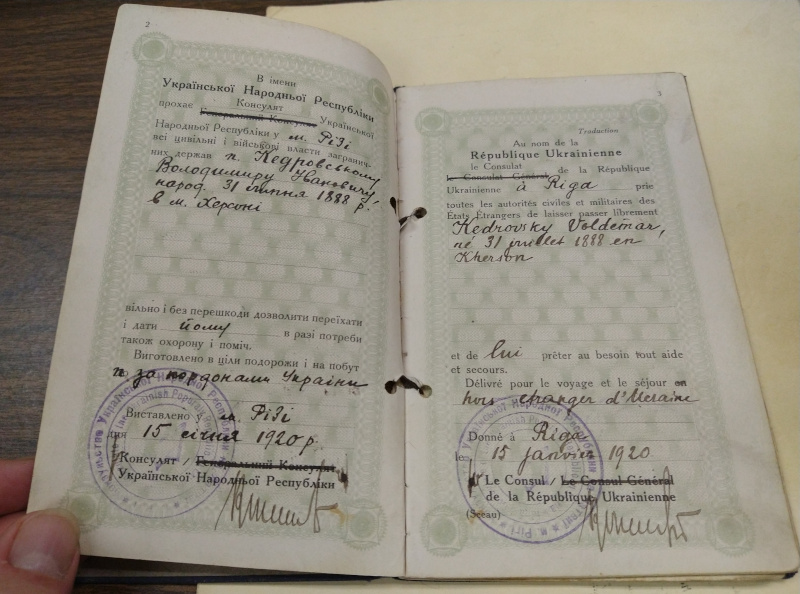 Kedrowsky was in Riga as part of the diplomatic corps of the UNR, where he was a delegate to the Russian-Polish peace negotiations that lead to the Treaty of Riga. A year later, he would travel to the other side of the Black Sea to serve as military attaché to the UNR mission to the Ottoman Empire, where the UNR was making last ditch efforts for support and international recognition.

Contrary to Putin's absurd claims, the UNR was considerably more than an insignificant, rag-tag band of upstarts emerging from the rubble of a collapsed Russian Empire. It had an army (of which Kedrowsky was at one point the Chief of Mobilization and Quartermaster General), a diplomatic corps, stamps, currency, and government ministries, including a Ministry of Education, Art, and National Culture, as we described in our 2018 exhibition Cultural Identity to Statehood: Ukraine 1917-1921. But geopolitical forces conspired to prevent it from getting widespread international recognition, and Ukrainian lands were ultimately partitioned between the Soviet Union and Poland.

You can learn more about Kedrowsky and his archives at the UHEC in the finding aid describing the collection, though this finding aid has not yet been updated with the recently-donated materials.

On the other side of the Dnipro River from Kherson is the town of Oleshky. Being small and in the direct path of Russian units moving north from Crimea, it was occupied almost immediately on February 24, 2022.

Oleshky was the birthplace of the Ukrainian Symbolist artist Yukhym Mykhailv, one of the most undeservedly obscure Ukrainian artistic figures of the 20th century. He studied art in Moscow on scholarship, then returned to Ukraine during the revolutionary period, where he remained until running afoul of Stalin in 1934 and dying the following year in internal exile in the Russian Arctic. The UHEC Patriarch Mstyslav Museum holds perhaps the largest collection of works by Mykhailiv anywere in the world, thanks to a bequest by Mykhailiv's son-in-law. This collection formed the basis of our 2019-2020 exhibition Visible Music: The Art of Yukhym Mykhailiv, which you can still view in the form of a virtual tour.