View an online virtual tour of the exhibition by the curator.

Yukhym Mykhailiv (1885-1935) was one of the most original, idiosyncratic, and undeservedly obscure Ukrainian artists of the early 20th century. His desire to convey the world of ideas, feelings, and sounds in visual form led to images that seem familiar, but are also unreal or puzzling. His Symbolist landscapes, musically swirling stars and waterfalls, incandescent flowers in moonbeams, and delicate still-lives were completely out of step with the work of his contemporaries. His nonconformity ultimately led to his arrest, exile, and untimely death in the Russian Arctic.

Thanks to the extraordinary efforts of his widow Hanna Mykhailiva and his daughter and son-in-law Tetiana and George Chaplenko, more than 80 of his drawings, watercolors, oils, and pastels safely made the perilous voyage through wartime Europe and across the ocean to the United States, where they remained in the family of the artist. He remained little-known in pre-Independence Ukraine, but has since been the subject of a 1997 international conference and a 224-page monograph and catalogue raisonné published in 2003.

Visible Music: The Art of Yukhym Mykhailiv is the first significant exhibition of this artist’s works in over 30 years, and is drawn from the 72 pieces acquired by the UHEC in 2008 as a bequest from George Chaplenko. Many of the works have not been displayed in public since 1962, and some have never been exhibited.

The exhibition opens with a reception and gallery talk on Sunday, November 17, 2019 at 1:00 pm at the UHEC Library Gallery located at 135 Davidson Avenue, Somerset, NJ 08873.

Gallery hours are Monday through Friday 9AM-12PM and 1PM-4pm, as well as the first Saturday of every month from noon to 4:00 pm. Groups welcome by appointment only. Call 732-356-0132 or email info@ukrhec.org for additional information. 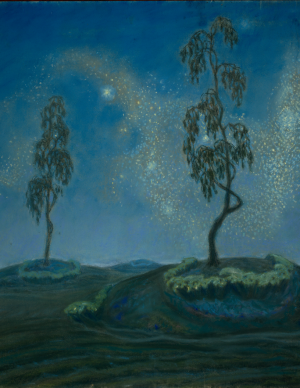