A challenge to history sleuths! 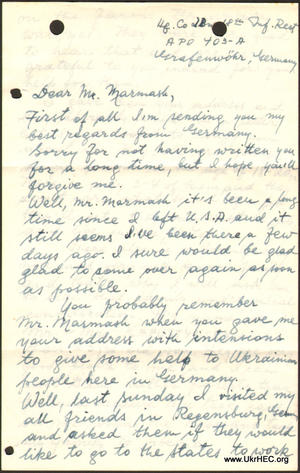 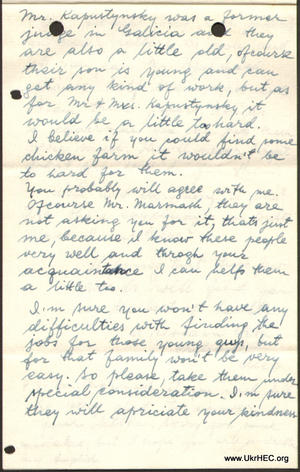 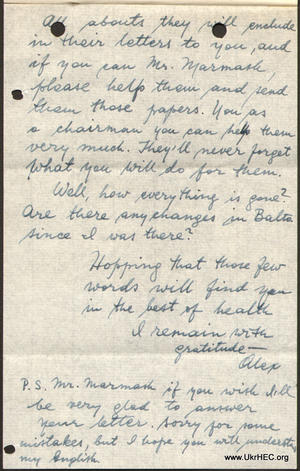 The mystery has been solved!

Joseph Marmash was actively involved in the resettlement of Ukrainian post-War refugees as farm workers in Maryland during the late 1940s, and his papers have many letters from refugees or in relation to particular refugee cases. This is one of the more curious of these letters. Although it is undated, it was probably written in 1949. The writer identifies himself only as "Alex", and he gives his address as "HQ Company, 2nd Battalion, 18th Infantry Regiment/APO 403-A" (as best as we can make out) stationed in Grafenwöhr, Germany. A quick check of the roster on the 18th Infantry's website doesn't show anybody named Alex during that time period.

What is curious about this letter is that he is asking for help in the resettlement of the Kapustynsky family, to which he feels very close "because they took care of me, when the Russians took my family to Siberia." This most likely happened in western Ukraine, because he indicates that "Mr. Kapustynsky was a former judge in Galicia." Therefore, it could only have occurred after the annexation of western Ukraine into the USSR in 1939, but before the Nazi invasion of 1941. However, the letter also implies that Alex lived in the US and spent time in Baltimore ("Are there any changes in Balto. since I was there?"). His written English is also quite good, though with a noticeable "accent" (to which he admits in the postscript: "I hope you will understand my English.")

So, here we have a number of mysteries. Who was Alex? Why was his family exiled? How did Alex escape getting sent to Siberia, and, even more amazingly, how in the world did he manage to get to the US during wartime?

Can any of you genealogy experts and history sleuths out there help shed some light on these mysteries? Feel free to put any information you manage to find in the comments below, or (if you're shy) contact us directly.

Alex(no last name given) states he has written to Mr. Marmash before...need to find previous letter. Alex could also be in DP camp and work for the Army base, his English and sentence structure is like he was schooled here in USA, could he have gone to school here and then with family returned and got caught up in the war?? Finding a list of Ukrainians at a DP camp is questionable but may exist. Mr/Mrs Kapustynsky with 23yr old son (no name given)...just a theory or assumption...I48764-Josyf Kapustysnkyj, I48726-Olha Kapustynskyj, I48763-Aleksander Kapustynskyj, nationality Polish..DP departed Bremerhaven aboard the USAT General McRae arrived 12-17-1949 Ellis Is., NY, was going to 66 Academy St., Amsterdam, NY. This family eventually settled in Hartford, CT. (Kapustinski - Kapustensky - Kapustynski) Joseph b.@1890 d.10-11-1956; Olga b. @1897 d. 6-21-1961; Alex b.5-11-1926 d. 11-21-1993; Irena (wife of Alex) b.11-10-1928 Ukraine d. 4-14-2009 buried St. Michael's Cemetery, Glastonbury CT...no children. To prove this, much more research is needed. Two cousins were listed in Irena's obit...how old are they and if elderly, are they still alive...so many questions...

Why didn't I think of that?!? :-) It should have occurred to me that Alex might have been born and/or grown up in the US, especially since that's what happened to my own father around the same time period. The dates could work: if he were, say, 20-something in 1949, then he would have been born in the 1920s and finished elementary school in the 1930s, when he might have "gone back" with his family (due to the Depression?). Maybe the Soviets didn't send him to Siberia because he was a US citizen. Very plausible.

I am still in the thick of processing this collection, and I'll certainly keep my eyes open for any other "Alex" letters. I'll also drop a line to the donor of the collection (Joseph Marmash's daughter) to see if she recalls anything.

I have now completed processing the collection, and I haven't found any other "Alex" letters. In addition, the donor also doesn't know anything about Alex, though she was quite intrigued when I told her about it.

Sorry, but the "Kapustynsy"s are all Ukrainian. My mother was Daria Kopystynsky from Rossford Ohio, distantly related to your archivist. The Kopystynsky family lived in the Peremyshyl area after one of them became the first Archbishop there, prompting the family to leave their holdings "Kopystyn" near Ternopol. Moved to Peremyshyl area (Boshko, now Besko Poland) somewhere in the 1500's (check Hryschevsky, can't remember the date). But All Ukrainian. Grandfather's uncle was painter Teofil Kopystynsky. His "Portrait of a Dalmation woman" was used as postage stamp for Ukraine. Did anyone try looking for "Olek" since that could also be 'olexander'

There are tons and tons of Kopystynsky's all over western Ukraine and eastern Poland. going to be tough to tell which family.