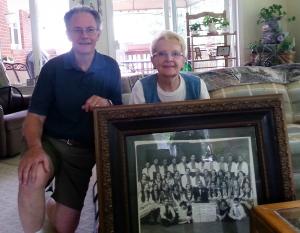 Last week, the Center was honored to receive of the collection of personal papers and records of Joseph Marmash, donated by his daughter and son-in-law Diana Marmash Carico and Richard Carico. Joseph Marmash was quite active in the Ukrainian-American community of Baltimore, Maryland, but the collection is most notable for providing remarkably detailed documentation of the efforts made by Ukrainian-Americans in resettling post-WWII Displaced Persons in the US.

In 1948, Joseph was appointed to the Maryland State Committee for the Resettlement of Displaced Persons, and in that capacity was responsible for coordinating resettlement logistics as well as following up on the refugees' well-being. The collection contains remarkably detailed documentation of his work, including an index card file, correspondence with numerous Ukrainian refugees, passenger arrival lists, and letters from resettled refugees complaining about poor living conditions, maltreatment, or breach of contract by their employers.

The collection also contains the records of the Ukrainian American Citizen's Club of Baltimore, as well as records other organizations and activities in which he participated. One of the more unusual parts of the collection is the complete set of 78 rpm phonograph recordings that were played in the Citizen's Club jukebox during the 1940’s and ‘50s. They provide a unique document of the variety of music that Ukrainian-Americans of the time listened to for entertainment and dancing, ranging from traditional Ukrainian songs to Elvis Presley.

Thank you Diana and Richard for your generous donation!