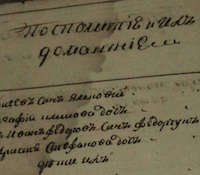 This blog post is dedicated to a review of the many new online resources for researchers with roots in Ukraine and Poland.

The Odesa Archives is Leading the Way in Online Access

There has been a lot of exciting news lately for those researching relatives in southwestern Ukraine, particularly in the areas in and around present-day Odesa oblast.  (If your ancestors were from nearby areas such as Mykolayiv, Kherson, or southern Kirovohrad oblasts, or even present-day Moldova, pay attention!  Records often crossed borders before they were archived.)  In addition to "Project Metryka," which is a project to put all of the archive's metrical records online, the archives has completed the digitization of the descriptions of all of its fonds (record groups) from the Soviet period (1917-1991) and has placed digital images of these descriptions online!  Presently they are organized by fond number.

A very helpful description of some of the more prominent fonds is available in English, so it is not necessary to click through fonds and read descriptions in Ukrainian. Untold treasures undoubtedly await in this trove of historical indices. Th direct link is http://viewer.archive.odessa.gov.ua, and helpful instructions are available in English:  http://archive.odessa.gov.ua/novosti/160210_baza-fondi.

The Metropolis of Kyiv is the oldest Eparchy (diocese) of the Ukrainian Orthodox Church, founded in the year 988 when Prince Volodymyr was converted to Orthodox Christianity.  These records don't go back quite that far, but they do go back a long way!  If you have Orthodox, Catholic, or Jewish ancestry from the region that is now Central Ukraine, the parish records held in the Central State Historical Archives in Kyiv may be of great help to you.

The Orthodox records are (mostly) duplicate copies of parish registers maintained by the former Eparchial Consistory in Kyiv (which includes not just modern Kyiv oblast, but also Cherkasy oblast and parts of Kirovohrad oblast, Zhytomyr oblast, and Vinnytsia oblast, but there are also stray records from all over Ukraine and also some from neighboring countries from isolated spans of time that found their way into this archive.  Many date to the mid-1700s and come forward as far as the time of the Bolshevik Revolution in 1918-1922.  The Roman Catholic records are organized by deanery, covering several villages, and the Jewish records are organized by village or town.

Your search has gotten a lot easier with the release of a new database of these parish metrical records! 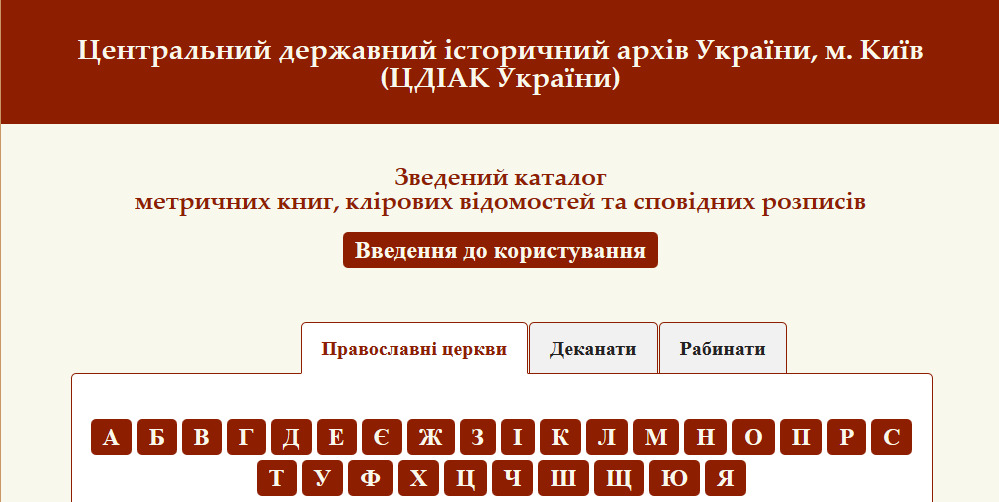 The database is in the Ukrainian language but even if you don't know the language, Google Translate should help you navigate the main points.  The index database includes the name of the parish, deanery, or congregation, the applicable village or town (in both Ukrainian and Russian), and its administrative jurisdiction in the 18th, 19th, and 21st centuries.  Then it lists which records are held by year and which archival fond contains that year's records for that place.  It serves as an index to vital records (birth/marriage/death), Orthodox annual confession lists, as well as annual registers of clergy.

Many of these records have been microfilmed by FamilySearch, and can be found via their catalogue, and a subset of these have now been digitized (with a newly-released batch bringing the image total to nearly 1,000,000 images) at FamilySearch as well.  The images can only be viewed in a Family History Center, and the microfilms are not well-indexed, many being indexed only at the level of the eparchy or deanery.  Accordingly, having the fond number for the particular metrical record for a particular year is invaluable to locate the correct microfilm.
As a final matter, for those parishes outside of what is now Kyiv oblast, it appears that after about 1875, many of their records, including original parish records (not consistory duplicates) are not to be found at the archive in Kyiv but rather in the oblast archive -- such as Cherkasy oblast or Kirovohrad oblast.  Accordingly, if you do not find later records in Kyiv, contact the oblast archive where the place is now.  Kirovohrad oblast archive has a helpful guide (in Ukrainian) to the original parish metrical books in its possession.

Did Your Relatives Suffer During the Great Purge?

Between 1936-1938 the height of Stalinist persecution occurred throughout the Soviet Union.  Millions were singled out and executed for actual or perceived slights against the Communist Party and the ruling regime -- usually with flimsy or no evidence.  Lists of many of those who suffered are available online. If you find a name on this list for a relative who lived in Ukraine, you can contact the Ukrainian Institute of National Remembrance for assistance in learning more about that person and their fate.