Museums are where generations meet 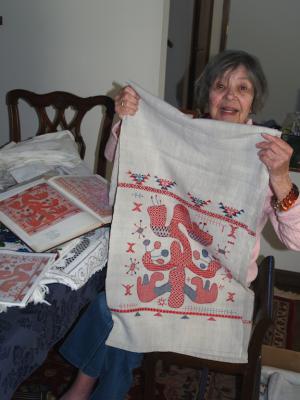 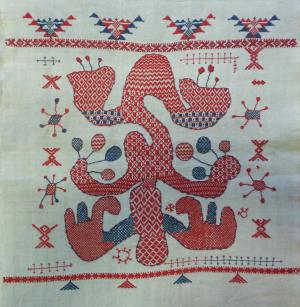 The title of this article is a quote that Dr. Luba Halata Kowalsky of Shwenksville, PA often repeated during the recent visit by Center diretor Natalia Honcharenko to her home. Ms. Kowalsky had come across this line in the Ukrainian art journal “Narodne Mystetstvo” (“Folk Art”) (No. 3-4, 2009), and she believes that the Ukrainian Historical and Educational Center is precisely the place where new generations can learn about the ancestors who have shaped what they are today.

Natalia had traveled to meet Dr. Kowalsky to receive her gift to the museum of her collection of antique Ukrainian homespun linen embroidered shirts, plakhty (women’s garments worn around the waist like a skirt), rushnyky (ritual towels), and other textiles, many of which date to the late 19th and early 20th centuries. The collection includes items brought to the USA by her family in 1949. Dr. Kowalsky was fortunate to have traveled to Ukraine in the 1960s and '70s as an educator participating in foreign exchange programs. Although it was difficult to travel freely without the Soviet authorities watching one’s every move, Dr. Kowalsky still managed to find her way to villages where antique textiles had been preserved, and was able to acquire them in order to expand her collection.

Dr. Kowalsky is herself a very talented embroiderer, who acquired her needle skills and love of traditional design from her mother, Halyna Halata, who came from the Poltava region of Ukraine. Along with the antique items, Dr. Kowalsky also donated embroideries made by her and her mother, including many varieties of samples, blouses, stylized dresses, and rushnyky.

Dr. Kowalsky has always been fascinated by the symbolism in the traditional designs of rushnyky. While looking through the book “Ukrainian Embroidery” by Tetiana Kara-Vasylieva (Kyiv, 1993) containing photographs of textiles from various Ukrainian museums, she was stopped dead in her tracks by the item in plate #157. This 19th century rushnyk from the Poltava region was like nothing she had ever seen before. “[It] just captivated me. It was a sophisticated design, ancient, and yet modern. I’m sure that my ancient ancestors had something to do with my fascination with this piece of art.” She decided that she simply had to go see this unusual piece of embroidery “in person”.

Unfortunately, when she arrived at the State Museum of Folk and Decorative Art in Kyiv during a trip to Ukraine in the early 2000s, she was denied the pleasure of seeing the object which had produced such an impact on her: the rushnyk was not on display, and the only person with the authority to take it out of storage was on vacation – for several months!

Nonetheless, Ms. Kowalsky was driven to see and feel this rushnyk in her own hands. Upon returning home to the USA, she made an enlargement of the photograph in the Kara-Vasylieva book, and set about recreating it stitch by stitch on a piece of homespun linen which she had brought from Ukraine. With the guidance and encouragement of Tanya Diakiw O’Neill, author of the well-known book “Ukrainian Embroidery Techniques”, Dr. Kowalsky mastered the necessary “rushnykovi stiby” (“rushnyk stitches”) used in the Poltava region. Tanya was already a friend of the family, as she had interviewed Dr. Kowalsky’s mother Halyna Halata as a part of her book research, and had learned from her how to make “pukhlyky”, the puffed stitches along the gathered tops of sleeve insets in Poltava-region blouses. The resulting re-created rushnyk was part of Dr. Kowalsky’s donation to the museum.

In Dr. Kowalsky’s opinion, the central design on this rushnyk is a particularly amorphous rendition of the “Tree of Life” (a common pre-Christian symbol in traditional Ukrainian embroidery), possibly merging with or transforming from a “zmij” (a serpent or dragon, another pagan life symbol). However, the design incorporates a number of smaller mysterious elements. For example, do the X-like figures along the sides represent people? Are the circles with the radiating spokes or tendrils symbols of heavenly bodies, plants, or something else altogether? What do the red and blue “picket-fence” lines represent? While these voices from generations of the ancient past may be hard to understand today, the overall effect is visually compelling  and has a great impact.

Dr. Kowalsky feels strongly that such an unusual and richly symbolic ritual cloth should be displayed in a museum setting, so that new generations of museum visitors can see it, and consider the many centuries of belief and symbolism embodied in its design. The story of Dr. Kowalsky’s rushnyk – her treasure and the work she is most proud of – will continue to educate, prompt questions, and encourage discussions among museum visitors for generations to come.

We thank Dr. Kowalsky for her gift and for letting us share her story of the rushnyk which had such a large impact on her. If you have a such a story, whether it involves an item of art or handicraft, a family document, or is simply a personal reminiscence, please contact the Center. We would love to be able to share your story with the rest of the world, and preserve that story for encounters by future generations!