Ukrainian Orthodoxy and the US labor movement? 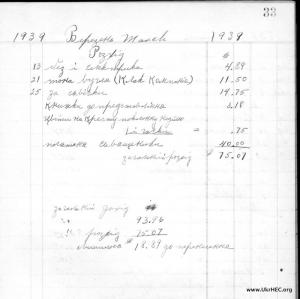 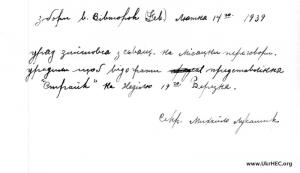 Our archival repository contain a number of collections of records from Ukrainian Orthodox parishes that have closed and no longer exist. While baptism, marriage, and funeral record books are of obvious interest to genealogists, the remainder (which include financial ledgers, meeting minutes, property deeds, and much else) may seem very dry, boring, and not of very much use. However, a careful reading can sometimes bring to light surprising historical facts.

One example comes from the records of the Sts. Peter and Paul Ukrainian Orthodox Church in Willimantic, CT. They include detailed meeting minutes going back to the initial organization of the parish at the height of the Great Depression, as well as numerous volumes of financial records. These give an interesting view into the daily life of a parish during the 1930s and '40s.

For example, the income and expense ledger entry for March 1939 lists a $4.89 gas and electric bill, $11.50 for a ton of coal, and $14.75 for candles. It is interesting that although they had gas service, they still used coal. Presumably the coal was for heat, while the gas was only for cooking. Furthermore, it seems surprising that they spent more on candles than for an entire ton of coal. How many candles could they possibly have been buying? Or were candles really that expensive (relative to coal)?

The expense list also shows a $3.18 payment for "knyzhky do predstavlinnia". The Ukrainian word "predstavlinnia" at that time meant "an amateur theatrical production", so the entry would translate as "books (scripts) for the play". What kind of play were they putting on? Perhaps something on a religious or moral subject?

Meeting minutes from February 14th of that year reveal that the parish council had approved the presentation of a play entitled "Strike". Presumably, it depicted events from the American labor movement, though further research would be needed to learn more about the play and its author. The choice of a labor theme is interesting, given that the American Thread Company of Willimantic was hit by a major walkout only 14 years earlier in 1925. One could easily imagine that some of the founding members of Sts. Peter and Paul Church had participated in the strike, though we have no way of confirming that.