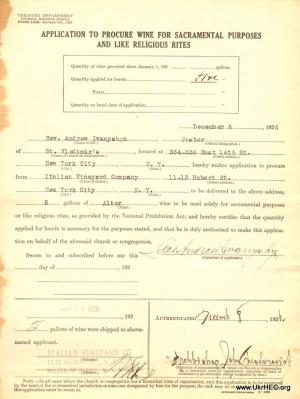 The Center archives already had some materials from this turbulent period, including the personal papers of Abp. Ioann, Fr. Dmytro Lyshchysyn, and Fr. Gregory Chomicky, but the bulk of the administrative records of Abp. Ioann's eparchy were believed to be either lost or destroyed.

On August 5th of 2013, this all changed. On that day, a box arrived from Ms. Luba Lewytzkyj in Minnesota containing correspondence and documents that turned out to be the records of the Archbishop's Chancery, as well as the records of Fr. Petro Bilon' in his capacity as Secretary of the Consistory. Ms. Lewytzkyj's father Rev. Volodymyr Lewytzkyj had been personal secretary to Metr. Ioann in the 1950s, and apparently these materials had been entrusted to him by the Metropolitan.

In addition to some historically weighty items, the collection includes more ephemeral articles such as US Treasury Department forms for the purchase of sacramental wine during Prohibition.

Thank you Ms. Lewytzkyj for hanging on to your father's papers, and for donating them to the Center!

I am glad that my tendency to hang on to things for years prevailed and that these archives patiently waited for 60 + years to be rediscovered. Reading these letters was like being a fly on the wall during our Church's early US history. I thank my father, BM Rev. Wolodymyr for safely harboring these historical documents until the day one of his children could find and return a small piece of history to our Church.