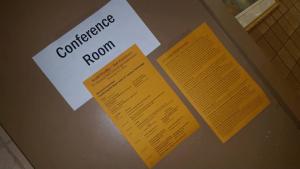 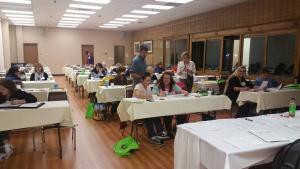 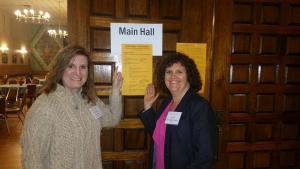 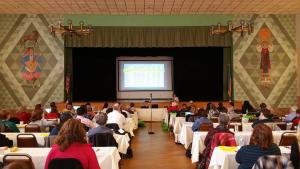 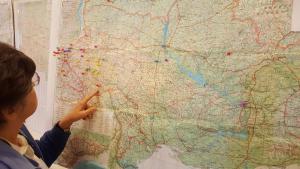 For the first time, the conference included dual-track afternoon presentations on Saturday, as well as a choice of optional sessions on the preceding evening. The Friday evening choices included a hands-on Cyrillic handwriting workshop, a presentation on genetic genealogy titled “Which Autosomal DNA test is right for you?” or an appointment with a language expert for personal assistance with document translation.

The main day of the conference was on Saturday, November 5, with two morning sessions. In “I Found my Village! Now What?” Julie Szczepankiewicz provided resources and strategies to help researchers find more information on their ancestral village. “Now I Found It! What Does It Say?,” a linguistic overview by Prof. Jonathan Shea examined various phonetic and grammatical features of the languages encountered in Eastern European research, and attendees worked through the translations of sample documents.

In the afternoon, participants were able to choose from talks on either the “basics” or “technology” tracks. The basics track included talks on “U.S. Alien Registration Files” by Shellee Morehead, “How to Locate Those Elusive Military Records for Ancestors who Served in the Austro-Hungarian Army” by Carl Kotlarchik, and “Finding Uncle Frank: Confirming the Identity of a U.S. Soldier Buried Under the Wrong Name” by Ms. Szczepankiewicz. The technology track featured three presentations for those researchers wanting to add tools to their genealogy toolbox: “Using Polish Language Websites for Genealogical Research in Galicia (Halychyna)” by Prof. Shea, “Genetic Genealogy (DNA) Tools” by Ms. Morehead, and “UAGenealogy: Discovering Online Genealogy Resources” by Michelle Chubenko.