Register with the Holocaust Survivors Registry! 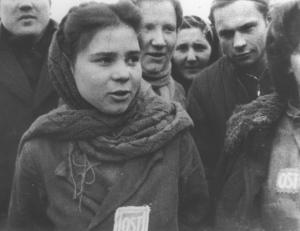 Are you, a parent, or a grandparent a survivor of Nazi persecution? The United States Holocaust Memorial Museum in Washington, DC wants to hear your story!

The USHMM maintains a database (known as the Benjamin and Vladka Meed Registry of Holocaust Survivors) of the names of "all survivors of the Holocaust and Nazi-era persecution–whether or not currently living–in order to record their experiences for future generations, assist survivors and their families in attempts to trace missing relatives and friends, and provide reference to scholars of the Holocaust, genealogists and members of the public."

Staff members of the USHMM who gave a presentation for the recent meeting of the Ukrainian Heritage Consortium of North America indicated that they are making a major effort to reach out to non-Jewish victims of the Nazi regime. They are looking for all Holocaust victims, which they define very broadly as any persons "who were displaced, persecuted, or discriminated against due to the racial, religious, ethnic, social, and political policies of the Nazis and their collaborators between 1933 and 1945." They were also quite clear that this includes all Ostarbeiters (forced laborers), including Ukrainians. A person need not have been an inmate of a Nazi death camp to qualify as a "Holocaust victim"!

If you or an ancestor was a forced laborer in Germany, was arrested by the Gestapo as a result of religious or political activities, or was arbitrarily executed by the Nazi army, then we urge you to register in this database.

The USHMM web site has registration forms in both English and Ukrainian! The victim need not be alive: you can register individuals posthumously.

If more ethnic Ukrainian victims of the Nazis register with this database, this will allow scholars to get a more complete picture of the havoc wrought by the Nazis on both the Jewish and non-Jewish populations of Ukraine.