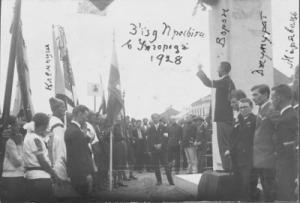 The UHEC archives has opened three collections related to the Ukrainian Transcarpathian region (or Zakarpats’ka oblast’): the Vikentii Shandor, Avhustyn Shtefan, and Volodymyr Komaryns’kyi papers. Together, they provide important information regarding the 20th century history of Transcarpathia, Carpatho-Ukraine, and the activities of Transcarpathians in the United States. The processing of these collections was motivated in part by researcher interest surrounding this year’s 80th anniversary of the declaration of Carpatho-Ukrainian independence.

Transcarpathia has had an extraordinarily complex history, even by Ukrainian standards. Bordering Poland, Slovakia, Hungary, and Romania, its inhabitants have included Ukrainians, Ruthenians (or Rusyns) of both Ukrainophile and Russophile orientation, Carpatho-Rusyns who consider themselves to be neither Ukrainian nor Russian, Hungarians, Slovaks, and other ethnic groups. It was part of the Kingdom of Hungary during the Austro-Hungarian period, became part of Czechoslovakia after World War I, obtained autonomous status as “Carpatho-Ukraine” in 1938, and declared independence on March 15, 1939, only to be invaded and annexed by Hungary one day later. It was incorporated into the Ukrainian SSR after World War II, and today is the westernmost oblast’ of Ukraine.

The three newly-opened collections and their creators reflect this complexity. Avhustyn Shtefan's family embodies the cultural divergences of the region: his father was the noted Greek Catholic priest and Ukrainophile activist Omelian Shtefan, but his maternal grandfather Fr. Evhenii Fentsyk (while also being a Greek Catholic priest) was a well-known and resolutely Russophile writer. The linguistic complexity is reflected in the actual documents of the collections, which are mostly in Ukrainian, but also include significant amounts of Slovak, Hungarian, German, and other languages.

The collections include descriptions of events in Carpatho-Ukraine, as well as unpublished records and correspondence. The Komaryns’kyi papers, for example, have extensive first-hand accounts of the beginnings of the Plast Ukrainian scouting movement in Transcarpathia. The Shtefan papers contain not only his own records, but those of his father, as well as family records and genealogical information going back to the mid-19th century. The collections also include extremely rare photographs of people and events in the region, including a possibly one-of-a-kind 1893 photograph of the 19-year-old future Carpatho-Ukrainian president Fr. Avhustyn Voloshyn with his family. Some of these images have already been used in an exhibition on Carpatho-Ukraine by the Ukrainian Insitute of National Remembrance.

A historical researcher specializing in Transcarpathia who has already made use of these materials believes that their contents has the potential to rewrite some parts of the historical narrative as it is currently accepted by Ukrainian historians of the region.

The collections are open for use by appointment. Please contact archives@UkrHEC.org for more information and to make arrangements.