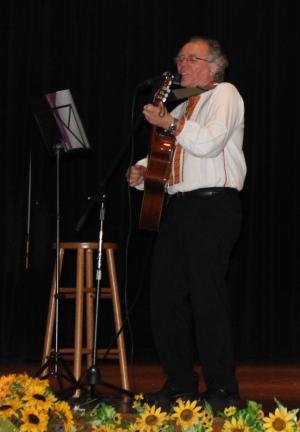 On Friday, August 22, the Ukrainian Historical and Educational Center in cooperation with the Ukrainian Orthodox Church of the USA presented a concert marking the 23rd anniversary of the nation's post-Soviet independence. Given the tumultuous year and continuing hostilities as Ukraine defends its territorial integrity, celebration is especially important, though it is tinged with sadness for those killed and displaced.

In his invocation, Grace Bishop Daniel called upon the audience to remember in their prayers those who sacrificed in the past and present in the struggle for Ukraine’s freedom and economic, social and religious stability. A formal proclamation from New Jersey governor Chris Christie was read, and Konstantyn Vorona, First Vice-Consul of Ukraine to NY, presented a greeting on behalf of the Consul General and Ukraine's UN Delegation.

The program included performances by the youth of the "Barvinok" dance troupe and Ukrainian pop singer Victor Sudir. Violin virtuoso Innesa Tymochko gave a rousing solo performance of folk song arrangements and light classics. The highlight of the evening was the performance by singer-songwriter Victor Morozov. He presented a number of original pieces and Sich Riflemen and UPA songs accompanying himself on the guitar, interspersed with reminiscences about his musical role in the struggle for Ukrainian independence as a member of the cabaret ensemble "Ne Zhurys'!" ("Don't Worry!") in the late 1980s and early '90s. He provided a musical perspective on much more recent history by singing a few of the many satirical songs created by participants of the Maidan protests.

The program was a fitting tribute to independence struggles past and present, and a reminder of the nation and culture for which those sacrifices were made.