The Carol of the Bells: How a Ukrainian carol became American 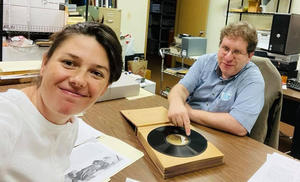 This "Stories from Storage", while it does feature items from the UHEC archives and museum collections, is a bit unusual. It is a slightly shortened presentation of a talk by Tina Peresunko that she gave in our online programming series in 2021 while she was still in the United States as a Fulbright scholar. She returned to Kyiv in January 2022, and as of March 1 is hunkered down in her hometown of Kyiv as the Russian Army continues its assault.

In this talk (in Ukrainian with English subtitles), she explains how Mykola Leontovych's setting of the Ukrainian winter song "Shchedryk" ended up in America and became the "Carol of the Bells". The story is very closely tied to the last time Ukraine fought for its independence more than a century ago, when the Ukrainian People's Republic launched a cultural diplomacy initiative in an attempt to rally international support for the embattled nation.

Our prayers are with Tina, her fellow residents of Kyiv, and the entire population of Ukraine.

The Carol of the Bells: The unbelievable story of the Ukrainian carol that became American