Nicholas Bervinchak and his portrait of Anna Sten 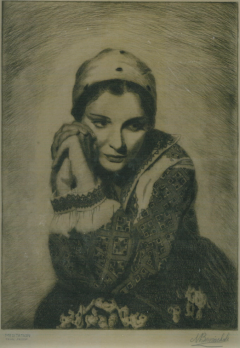 While he is not a household name even among Ukrainian Americans, Nicholas Bervinchak was an important painter and print maker in the American Regionalist and Social Realist style, as well as a church muralist in the heavily Western-influenced Byzantine style popular among immigrants from Austria-Hungary in the early 20th century.

In this video, guest speaker Michael Buryk tells not only the story of Bervinchak, but also one of more unusual works: a portrait of the Kyiv-born Hollywood movie actress Anna Sten, who starred in several films in the 1930s.