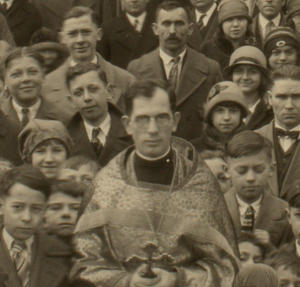 On January 7th (Julian Calendar Christmas) in 1927, the members of that parish family gathered to take a photograph front of the beginnings of the construction of their brand new church building. This was not just any photograph, but a 3 foot wide panorama photograph!

The above image is ZOOMABLE! It is nearly 50 megapixels and has enough resolution to easily see individual faces. If you are of Ukrainian background and have family ancestry from the Cleveland area, it is entirely possible that one of these kids could be your grandparent (or even great-grandparent)! 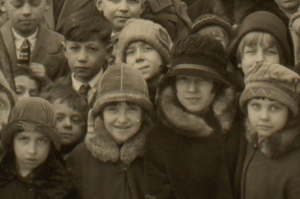 Panorama photographs such as this were very popular from the 1920s to the 1940s, and photographers with the necessary equipment and film had a good business taking commemorative photographs of large groups. Since the lens of the panorama camera actually rotated slowly across the crowd, a wise guy could stand at the far end of the group, then run over to the other end while hidden behind the other people and arrive before the camera lens got there, and so would show up twice in the same photograph. Since the crowd here is standing all the way against the building, this stunt would not have been possible in this case.

In the center of the front row is Fr. Gregory Chomicky, who was sent from Chicago to Cleveland by the newly-arrived Ukrainian Orthodox Archbishop Ioann (Teodorovych) with the specific purpose of founding this parish. Fr. Gregory was one of the first Ukrainian Orthodox priests in the United States, and he would go on to found or serve parishes in Willmington, Delaware and Jeanette, Allentown, Ambridge, and Scranton, Pennsylvania. He would play significant leadership roles in Ukrainian Orthodox jurisdictions in the United States for the rest of his life. Fr. Gregory was not only successful in leading parish religious life and beginning construction of the new church building in Cleveland, but he also worked to organize choirs and theater groups under the umbrella of the parish, and these ensembles took an active role in the wider Cleveland community, such as in the "All Nations Exposition" and the "Theater of the Nations" performance series. Much of this work is documented in Fr. Gregory's archives at the Ukrainian History and Education Center.

When this photograph was taken, Prohibition was the law of the land in the United States. In order to obtain communion wine, parish priests had to submit application forms to the Internal Revenue Service signed by the priest and by his ecclesiastical superior. One such form submitted by Fr. Gregory in 1925 and signed by Archbishop Ioann has survived in Archbishop Ioann's chancery records (zoomable image!):

The parish founded by Fr. Gregory has continued to thrive, and now has the status of "cathederal" within the Ukrainian Orthodox Church of the USA.