The story of a 100-year-old passport 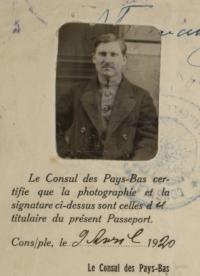 This passport is quite unlike any passport we're used to seeing today. It's not in the usual form of a booklet. And it wasn't even issued by the person's country of citizenship. Learn about how a Ukrainian from the Kuban' region north of the Caucasus Mountains ended up in Constantinople before moving to Prague, Czechoslovakia after World War I.