A Ukrainian American musician on the USS Arizona 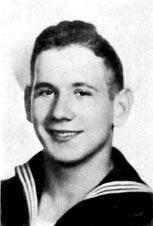 In our 2017-2018 exhibition "Shepherding Ukrainian Orthodoxy in a New Land", we displayed two clippings from the Newsday newspaper on Long Island, New York published February 22, 1942. They show photographs of the empty casket funeral for Harry Chernuha, who died in the Japanese attack on Pearl Harbor. The clippings come from a scrapbook in the UHEC archives that was assembled by Metroplitan Andrew Kuschak of the Ukrainian Orthodox Church in America.

In this Stories from Storage, we explore how much more we can potentially learn about the young man that is the subject of these clippings. What did he do? Where were his origins? Who were his parents?

The answers were more interesting than we expected. 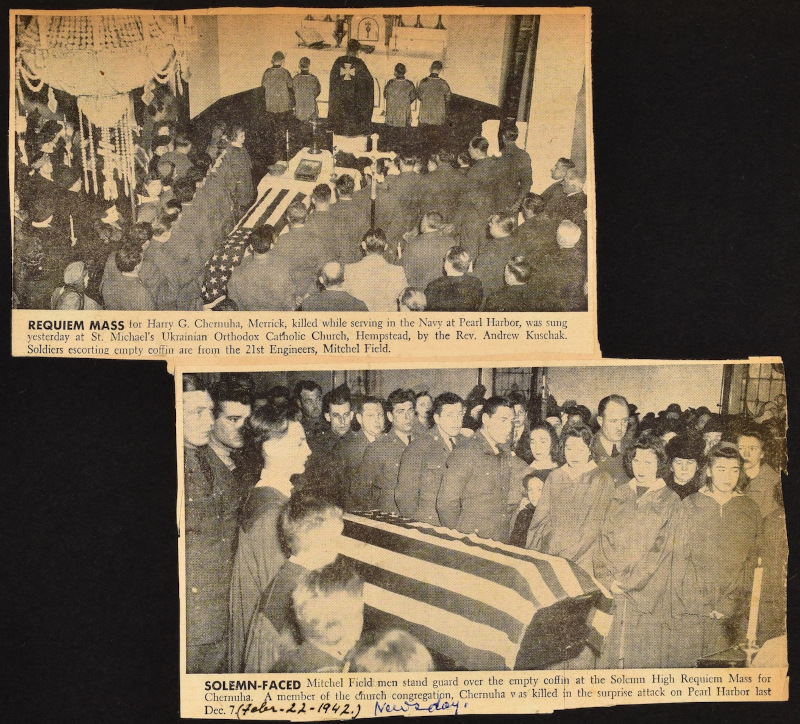 The first stumbling block was that "Chernuha" was not the typical spelling of his surname. Anybody who has done Ukrainian genealogy knows that this is completely par for the course: there are no universally "correct" spellings of names in English or other Latin-alphabet languages. It turns out that the family used the spelling "Chernucha", which likely corresponds to the Ukrainian "Чернуха" ("Chernukha" in Library of Congress transliteration). This is potentially confusing to English speakers, as the first "ch" is pronounced as it normally is in English, while the second is pronounced as in the Hebrew "L'Chaim" or the Scottish "loch".

With this spelling, we were able to find a commemoration page on "togetherweserved.com": 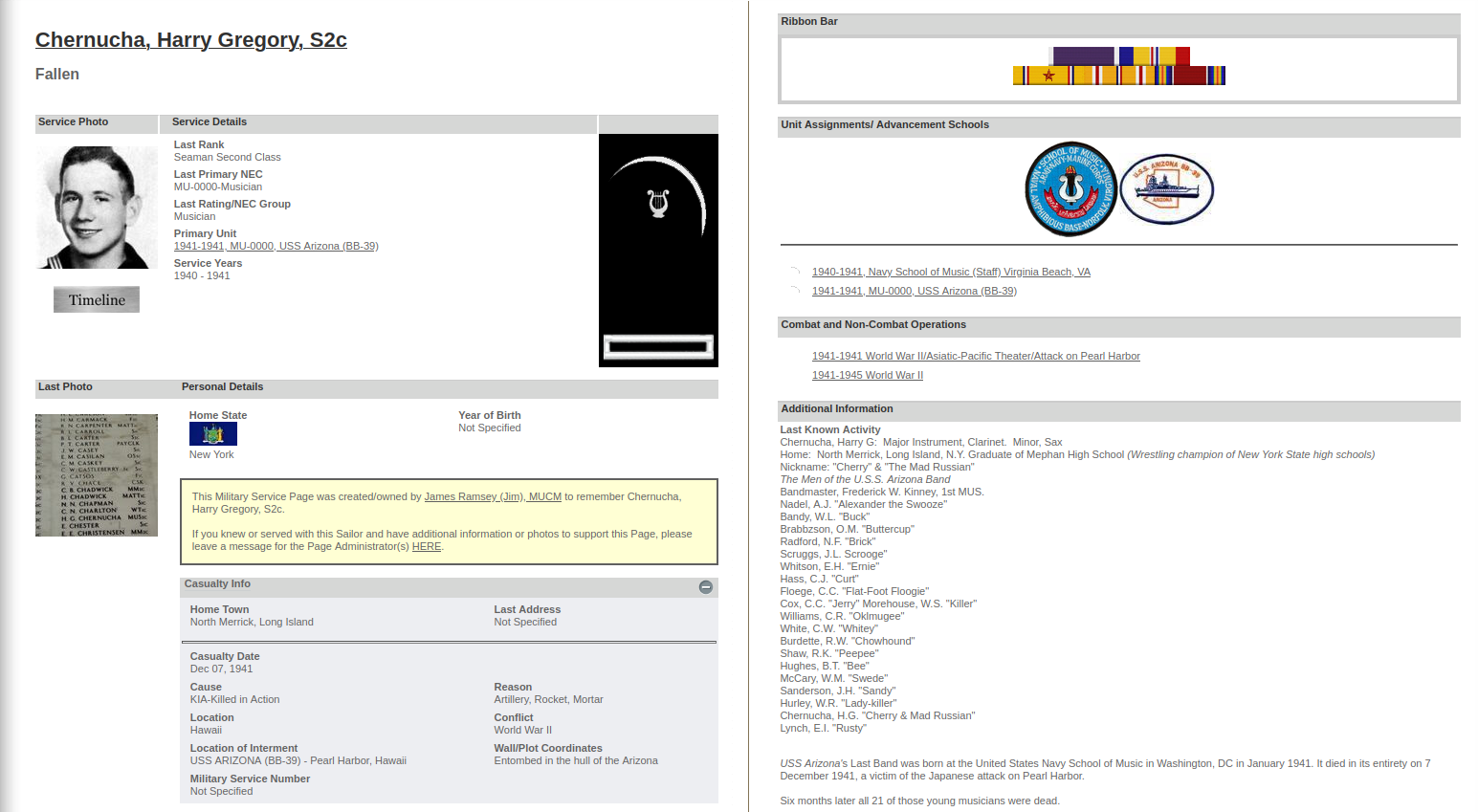 It turns out that Harry Chernucha was not an ordinary seaman. He was actually a musician who played the clarinet (and secondarily the saxophone) in the USS Arizona's "Last Band". Like most of his fellow sailors, his remains are still in the wreckage of the Arizona, which is why the family had the "empty casket" funeral. 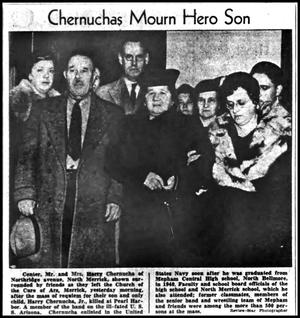 The "Chernucha" spelling also allowed us to find an additional photograph of the family, which indicated that his father's name was also Harry (at least according to this account), and that the funeral took place at the "Church of the Curé of Ars" in Merrick, Long Island, which explains its decidedly non-Orthodox appearance in the Newsday photographs. It also indicates that Harry Jr. was the couple's only child, which must have been completely devestating for them.

So, who were "Mr. and Mrs. Chernucha"? We were able to find the 1930 US Census record for the family:

But here, Harry and Harry Jr. show up as "Harasim"! Clearly, this was their actual baptismal name. Harasim (or Herasim) would not have been uncommon for Ukrainians in this period, and it's derived from the Greek Gerasimos - "one who deserves honor". They both obviously "Americanized" it to "Harry". And we finally have at least a given name for "Mrs. Harry": it was Anna. Harry Jr., it turns out, was not born on Long Island, but on the other side of Long Island Sound in Norwich, Connecticut.

The birthplaces of his parents, however, are interesting. Harasim Chernucha was born in what looks like "Pdivslock" (or possibly "Polivslock") "Russia". Neither of these make any sense as a Ukrainian place name. However, our Nashi Predky team member Michelle Chubenko was able to find his naturalization petition. There his place of birth is clearly typewritten as "Powoloch, Russia", which is most likely the town of Pavoloch, today in Zhytomyr oblast', Ukraine. Anna, by contrast, has her place of birth listed as "Galicia, Austria", which is tremendously unhelpful. That's like an American saying that they were born in "California, USA". But even that is interesting: this was a "mixed marriage" between a man from the Russian Empire who was likely Orthodox Christian, and a woman from the Austro-Hungarian Empire who was likely Greek Catholic. Both, however, indicated that the language that they spoke prior to coming to the United States (the right-most column in the image above) was Ukrainian.

The priest who officiated at the empty casket funeral was Fr. Andrew Kuschak.

Fr. Andrew was no stranger to the military. In 1918, as a 17-year-old and long before he became a priest, he had enlisted in the Ukrainian Galician Army of the West Ukrainian People’s Republic. At the end of the ill-fated War of Ukrainian Independence he was interned for two years as a prisoner of war in Romania (the photo at the left is of him from this period). After his release, he returned home to what had now become the Second Polish Republic and studied law at the Universities of Lviv and Kraków. He emigrated to Canada in 1928 and was ordained a priest in 1932. He would eventually become Metropolitan of the Ukrainian Orthodox Church in America.
forum