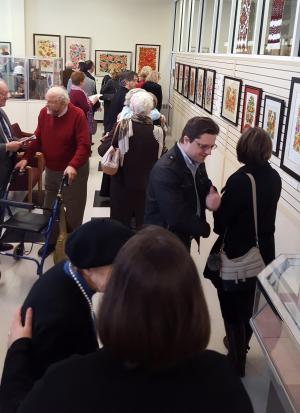 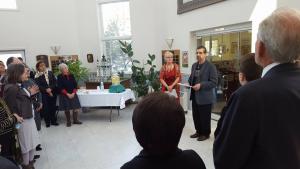 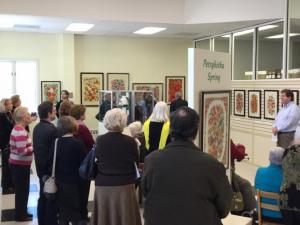 On March 19, 2017, the Center opened its latest exhibit in its Library Gallery, entitled "Petrykivka Spring" to an audience of nearly 70 visitors. It presents the artwork and the history of the Petrykivka folk art tradition, which in 2013 was added to the list of the Intangible Cultural Heritage of Humanity by UNESCO. It includes over 30 works by noted contemporary artists in the tradition from the collection of Yuri Mischenko and Natalie Pawlenko, as well as the story of how it went from being widespread in the 18th century to near complete obscurity by the end of the 19th century, only to be "reborn" in the 20th century and turn into a pop-cultural phenomenon in the last decade.

After an introduction by Center director Natalia Honcharenko, Mischenko and Pawlenko spoke about how they became interested in Petrykivka art and became avid collectors in part to support the current traditional artists. The Center's Dr. Michael Andrec (who curated the exhibit together with his colleague Oksana Pasakas) gave a short gallery talk in English on Petrykivka's ancient origins in folk spirituality, its connections to the 17th and 18th century Ukrainian Kozak state, and its recent transformation into a "brand image" of independent Ukraine.

The exhibit will be on view in the UHEC Library Gallery through the end of June.