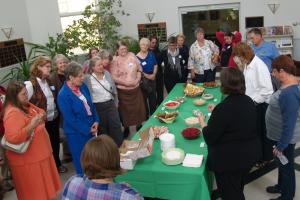 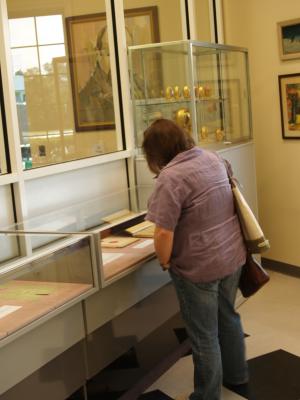 When Linda Norris was awarded a Fulbright Fellowship to travel to Ukraine as a museum studies consultant at the Kyiv-Mohyla Academy, she didn’t know that Ukrainian food would become a major part of her life. However, during her stay, she became fascinated by Ukrainian home cooking, the complexity of regional Ukrainian foodways, and how the difficulties of 20th century Ukrainian history has impacted how people eat in Ukraine today.

Since then, she has travelled throughout Ukraine, from the Carpathians in the west, to the coal mines and metal factories of Donbas in the east, to ethnic Greek villages near Mariupol in the south, and to the homes of Tartars who have returned to the Crimea after being expelled by Stalin on one fateful day in May 1944. She has written about her experiences and observations in her blog, “The Pickle Project”.

On September 15th, 2013, Linda came to the Ukrainian Historical and Educational Center in Somerset, NJ to speak about her travels and experiences in an even cosponsored by the Historic Foodways Society of the Delaware Valley, an organization of American food enthusiasts interested in historical and traditional ways of cooking and eating.

Linda began with a brief but cogent summary of the complex and often less-than-pleasant history of Ukraine in the 20th century, including revolution in the 1910s, the Holodomor of the 1930s, war in the 1940s, and shortages and food lines during Communist rule in the subsequent decades.

She then described the resiliency of Ukrainians in the face of these hardships, and how their responses have shaped current Ukrainian foodways. In particular, she emphasized how cultural memory of these experiences has created a lifestyle that subconsciously assumes that while things may be fine today, but they may be terrible tomorrow. This is reflected in the tremendous emphasis on self-sufficiency in contemporary Ukrainian food culture, as can be seen in the ubiquity of gardening, gathering, foraging, drying, and pickling. She illustrated this with examples of an older woman gardening on a tiny plot within a stone’s-throw of a major Donbas metallurgical plant, and a relatively well-off office worker who nonetheless spends most weekends gardening at her “dacha” and supplying her extended family with fresh fruits and vegetables.

She also spoke about the economics of food production in contemporary Ukraine, which is still surprisingly dominated by local markets and the “market ladies” who sell produce that they have grown or gathered themselves. She surveyed the wide variety of food products that are commonly eaten in Ukraine today, including vegetables, fruits, mushrooms, and other produce (in fresh, dried, preserved, and pickled forms), meats (including the famous, or infamous, salo), varennyky, locally-produced honey, and beverages (such as the diversity of infused vodkas). She also told a fascinating tale of her visit to a livestock herder’s and cheese-maker’s hut in the Carpathian mountains.

Of course, the survival of these traditional foodways are under threat both from apathy (“I’m not going to bother to learn how to pickle, because that’s what my mom and grandma do”) and from the inexorable advance of western-style “fast food”. Linda and her associates have already raised more than $5,000 on Kickstarter, and are currently working on incorporating The Pickle Project as a non-profit organization with the goal of engaging multiple generations of individuals in Ukraine and elsewhere in conversations about food, sustainability, and community.

After the talk, the participants had a chance to sample some of the foods that they had just heard about. The buffet included not only homemade pickled vegetables (cucumbers, tomatoes, mushrooms, and cabbage), but also meats, herring, “vinihret” (beet salad), and an example of one of the many varieties of “mayonnaise salad” so beloved by contemporary Ukrainians.

In conjunction with the talk, the Historical and Educational Center devoted some of its temporary gallery space to a presentation of food-related artwork and archival materials from its collections. On display were a selection of 24 linocuts by the Ukrainian graphic artist Mykola Bondarenko from his 80 print cycle entitled “Ukraine 1933: A Cookbook”. They depict the unbelievable “menu” of weeds, corn husks, and other barely edible materials on which survivors of the Holodomor subsisted. The exhibit also depicted the food shortages faced by post-war refugees in German displaced persons camps through archival documents such as meal coupons and “doctor’s orders” for additional food rations. Another aspect of Ukrainian food could be seen in photographs and botanical drawings from the archival collection of Kira Arkhimovych, a biologist and plant breeder who worked on developing new strains of tomatoes in Ukraine, Germany, Spain, and the United States.