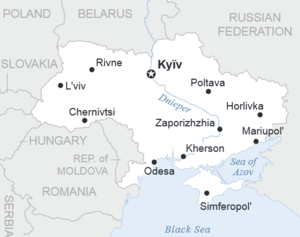 Ukraine is the largest country in terms of territory that is located entirely within Europe. It is just smaller than the state of Texas, just larger than France, and substantially larger than Germany.

Although ethnic Ukrainians make up the majority of Ukraine’s people, it has nonetheless for centuries been multi-ethnic and multi-lingual, with significant minority populations of Jews, Russians, Poles, Romani, Hungarians, Romanians, Tatars, Greeks, Moldovans, Armenians, Bulgarians, and others. Even within the ethnic Ukrainian population there is great regional diversity in language, folk arts, and culture.

Ukrainian is a Slavic language that shares features with the neighboring languages of Polish, Belarusian, and Russian. It is written in the Cyrillic alphabet (like Russian, Serbian, Mongolian, and other languages). Due to centuries of intense Russification, a large majority of residents of Ukraine today are to to some degree bilingual in Russian and Ukrainian. Many, particularly in central and eastern regions of Ukraine, prefer to speak Russian or "siurzhyk", a distinctive mix of Russian and Ukrainian. That does not automatically mean that they self-identify as ethnic Russians, and it is very unlikely that they feel allegiance to the Russian Federation or a lack of allegiance to Ukraine. This situation is similar to that of other formerly colonized nations. For example, just because most citizens of the Republic of Ireland speak English rather than Gaelic, that doesn’t automatically mean that they want to rejoin Great Britain.

Most religiouly observant Ukrainians are either Orthodox Christian or Eastern rite (Greek) Catholic, but there are also Roman rite Catholics, Protestants, Jews, Muslims, and believers of other faiths. To learn more about the complex history of Orthodox Christianity in Ukraine and its intersections with art, culture, and geopolitics from the 17th to the 21st centuries, view our online exhibition “Autonomy Lost and Regained: 1633-2019”.

Ukraine was the site of the first major Slavic state, the Kyivan Rus’ (pronounced “Roos”). In the 10th and 11th centuries, it was second only to the Byzantine Empire as a European power, and it established kinship ties to many nations in Europe, including France, through dynastic marriages. Weakened by internal power struggles and foreign invasion, the western remnants of Rus’ were incorporated into the Kingdom of Poland or the Grand Duchy of Lithuania, and finally into the Polish-Lithuanian Commonwealth.

A Ukrainian state emerged in the 17th century in the form of the Cossack Het’manate that began as a rebellion against the Polish-Lithuanian Commonwealth, but which grew to become a sophisticated government that pursued diplomatic relations with world powers.

Russian claims that Ukraine is “a part of Russia” are based in part on the 1654 Pereiaslav Agreement between het’man Bohdan Khmelnytskyi and tsar Alexei I of the Tsardom of Muscovy, which Russian and Soviet historians have traditionally portrayed as the “reunification of Ukraine with Russia”. Current historical scholarship has disputed this assertion. In the negotiations that led to this Agreement (which the Harvard historian Serhii Plokhy has aptly dubbed the “Pereiaslav disagreement”), neither side fully comprehended what the other thought that it was agreeing to: Khmelnytskyi thought he was agreeing to a protectorate, while the tsar assumed he was simply gaining new subjects. The linguistic gulf between the two sides was so deep that they needed interpreters to communicate. Despite the Russian pressure that followed, the Het'manate managed to maintain autonomy for well over a century. 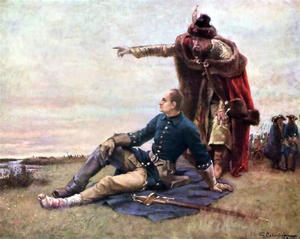 After the ruinous defeat of Ivan Mazepa and his Swedish allies in the Battle of Poltava in 1709, the Russian army under Alexander Menshikov sacked Mazepa’s fortress in Baturyn, massacring the women and children who had gathered there for safety. Successive tsars gradually abolished the Het’manate. With the Partitions of Poland in the late 1700s, much of the land that now makes up Ukraine came under the direct control of Moscow, with the remainder becoming part of the Austro-Hungarian Empire.

Attempts by Russia to suppress Ukrainian language and identity were routine through the 18th and 19th centuries. For example, the Valuev Circular and the Ems Ukaz banned the publication of Ukrainian books and periodicals in the Russian Empire. The Valuev Circular even declared that “the Ukrainian language never existed, does not exist, and cannot ever exist”, thereby ironically proving the exact opposite: why would you need an edict banning something that doesn't exist?

The restrictions on Ukrainian-language publications were loosened after the 1905 revolution, and a rebirth of Ukrainian culture and identity began. There was a strong “Ukrainian bloc” in the Russian Duma (which was also created in response to the revolution) that joined with delegates from other non-Russian regions to press for concessions like allowing education in languages other than Russian.

During the subsequent revolutionary period that began in 1917, Ukraine had a brief period of independence, beginning with the formation of a socialist Ukrainian People's Republic (in Ukrainian, Ukrains'ka Narodna Respublika or UNR). Unfortunately, it did not have the strength to withstand the Bolshevik advance. It fell in 1918 and was replaced by a German-supported conservative monarchist Ukrainian government under the het’man Pavlo Skoropads’kyi, which in turn was replaced by a revived left-leaning UNR under Symon Petliura and the Directorate.

Banknote of the Ukrainian People's Republic, 1918

Contrary to recent absurd claims, the UNR was considerably more than an insignificant, rag-tag band of upstarts emerging from the rubble of a collapsed Russian Empire. It had an army, a diplomatic corps, stamps, currency, and government ministries, including a Ministry of Education, Art, and National Culture, as we described in our 2018 exhibition "Cultural Identity to Statehood: Ukraine 1917-1921". But geopolitical forces conspired to prevent it from getting widespread international recognition, and Ukrainian lands were ultimately partitioned between the Soviet Union and Poland.

The 20th century was calamitous for Ukraine. An artificial famine engineered by the Stalin regime in 1932-33 was responsible for at least 5 million deaths, while the Soviet and German armies were responsible for 7 million more. World War II resulted in a mass exodus of refugees, many of whom ended up in North America.

With the collapse of the Soviet Union in 1991, Ukraine again became an independent country. By signing the “Budapest Memorandum”, it became the first nation in the history of the world to voluntarily give up its nuclear weapons in exchange for security guarantees, which obviously were not enough to prevent Russian annexations in 2014 and a full-on invasion in 2022.

In the fall of 2013, the Maidan protests began against the corrupt Russian-leaning government of Viktor Yanukovych. Instigated by students and young professionals and growing to include people from all walks of life and all regions of the country, the protestors constructed a self-contained city-within-a-city on Kyiv’s central Independence Square (“Maidan Nezalezhnosti”). Enduring bitter cold, the brutality of riot police and regime-sponsored thugs, and even snipers, they ultimately succeeded in toppling the Yanukovych government. In response, Russia annexed Crimea and created “separatist” enclaves in the eastern border areas of Ukraine. The effect of this was to boost Ukraine’s sense of national identity, revive the Ukrainian language, and reinvigorate the military. This turned out to be critical, as we have seen in the valient response of Ukraine’s people to the Russian invasion of February 2022.

“The Gates of Europe” by Serhii Plokhy is a concise, authoritative, and very readable overview of Ukrainian history. Timothy Snyder’s “Bloodlands: Europe Between Hitler and Stalin” and Anne Applebaum's "Red Famine: Stalin's War on Ukraine" provide much longer and more detailed accounts of the horrors of the 20th century.

Ukraine is probably best known for its embroidery and pysanky (singular: pysanka, wax-resist decorated Easter eggs). Both have origins in deep antiquity, and their patterns and motifs are full of pre-Christian symbolism. Embroidered shirts, aprons, and ritual towels have tremendous regional variation, from the large blocks of bright colors in the west to the subtle white-on-white designs of the Poltava region in the east. Pysanky are similarly diverse, but all are symbols of the rebirth of life. Ukraine has other less well-known but equally deep artistic traditions, including ceramics, wood carving, weaving, and religious folk iconography.

Ukraine has a centuries-long history of fine art and architecture, from medieval mosaics and frescoes, continuing through the Ukrainian Baroque, and on into the modern era. This history is far too large to cover here, but you can see some examples of Baroque-era Ukrainian book art in our online exhibition “Autonomy Lost and Regained: 1633-2019”, and the work of the Ukrainian Symbolist artist Yukhym Mykhailiv in a virtual tour of our 2019-2020 exhibition of his works.

Rodovid Press in Ukraine publishes a scholarly journal and some of the most authoritative and beautifully illustrated books on Ukrainian art and material culture available. Due to the state of war, delivery of products from Ukraine is, of course, currently impossible.

Ukrainian folk music ranges from the instrumental music of the Carpathians, which has much in common with that of neighboring Romania, Slovakia, and Hungary, to the broad polyphonic singing of the steppes. Ukrainian music also include the kobzar and lirnyk epic and religious songs, as well as strong classical and popular music traditions.

The Ukrainian winter ritual song "Shchedryk" has now become world-famous as the "Carol of the Bells", and the story behind it is a fascinating tale involving a talented composer, a brilliant choir, and an effort at cultural diplomacy by the Ukrainian People's Republic.

Ukrainian dance has also become world-famous, mainly through the work of pioneering dance masters and choreographers Vasyl’ Avramenko in North America and Pavlo Virskyi in the Soviet Ukraine. Numerous Ukrainian dance ensembles exist throughout the US and Canada, attracting young dancers of all ethnic backgrounds.

Despite the growth of western-style mass-produced food and large supermarkets, many Ukrainians still get their food from their own gardens, local producers, or small-scale entrepreneurial importers (at least prior to the war). Traditional Ukrainian foods overlap considerably with those of neighboring countries and with Ashkenazi Jewish food traditions. Breads and potatoes are ubiquitous, along with borshch (the sometimes difficult-to-pin-down beet soup⁠—though sometimes it doesn't even contain beets); varennyky (“pirogies”, dumplings with many possible savory or sweet fillings); pickled and fermented foods of all descriptions; and cured meats, sausages, hams, and the infamous salo (cured pork fatback). 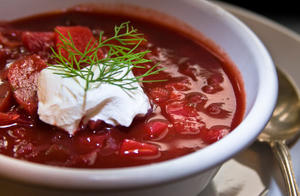 A variety of Ukrainian and East European recipes can easily be found on the Internet. Chef and cookbook writer Olia Hercules has recently published a wonderful book entitled “Ukrainian Summer Kitchens” that includes both recipes and descriptions of foodways in Ukrainian villages and small towns. She has appeared as part of the UHEC’s online programming and on "Milk Street Television".

Email us at the address below, and we'll get back to you, time-permitting.